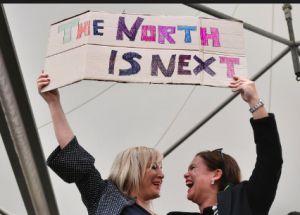 There was a time when unionist politicians claimed to have no interest in events south of the border. It was another country, they explained, and the north was part of the UK. When it became absolutely necessary to withdraw their heads from the sand, they looked to London, not Dublin.

Brexit has made the unionist world-view more than a little out of date. Suddenly the relationship between the north and the south of Ireland has become crucial to economic development. The DUP may talk of the importance of our NEN’s trade with Britain, and they’re right. – the northern economy does rely heavily on exports to Britain. But it also is inextricably linked with the south of Ireland, which leaves the DUP in the impossible position where they don’t want special  EU status for the north. They don’t say it out loud but everyone can read their lips: “Anything making us look less secure inside the UK and more aligned with the south of Ireland is a non-starter.” This, despite the fact that 56% of people at the time of the Brexit referendum made it clear they wanted to stay in the EU. That figure is now considerably higher, according to more recent polls. On Brexit, the DUP is seriously out of step with the people of the north.

And just as they’re being toasted on one side by the Brexit spit, along comes the south’s abortion referendum, and their other side feels the heat. There are people like me who are deeply saddened at the decision taken by the people in the south in the abortion referendum, but we have to accept the democratically expressed wishes of the people in the south. However, that doesn’t mean we shouldn’t look at the fact that yesterday’s news showed Mary Lou McDonald and Michelle O’Neill holding up a scrawled-on piece of cardboard: “The North is next.”

Whether we like it or not – and I don’t – Britain and the rest of the world sees the south’s referendum result as that state moving into the twenty-first century. The DUP is taking the same stance as the No side in the south: it is, with some exceptions, opposed to abortion. But as the great majority in the south showed they were in favour of abortion, the north will almost certainly show a similar voting pattern, despite the claims of Ian Paisley Jr, Paul Givan  and other DUPers.

First Brexit, now abortion. The DUP, no matter what way it turns, is being seen as obstructionist and out of touch. You may love that or you may loathe it, but you can’t deny it. And the heat on the DUP will only get more scorching.

View all posts by Jude Collins →
The south of Ireland gives its answer
The DUP: deaf to the winds of change