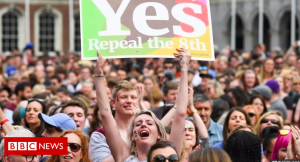 The abortion debate has been won by the side that wants abortion available in the south  (and in the north anon),  so it’s pretty pointless to think of reinforcing the stable door after the horse has kicked it down and gone thundering off. The electorate of the south have made it clear that they want no-questions-asked abortion up to twelve weeks and that’s what they’re going to get,  in double-quick time according to the now-popular Simon Harris of Fine Gael.

The joyful scenes of celebration over the weekend  were reminiscent of similar response from throngs of young people after the gay marriage referendum had been won.  And as with gay marriage,  this referendum campaign was notable for the wide presence of  these throngs of young people who clearly believe passionately that abortion is  a woman’s right, and they’ve seen to it that she’s going to get it.

Perhaps this is the moment when the Irish people in the south (and, as I say, the north shortly) threw off the shackles of a repressed Ireland and drop-kicked Irish society into the twenty-first century. It certainly means that the south of Ireland will have abortion legislation very much in line with most countries in Europe. Is that a good thing? Normally I would say yes, but in this case  I believe (but wasn’t able to vote) No. Going with the flow, as someone once suggested, is characteristic of dead fish – or in this case, dead babies. So getting in line with most of modern Europe may be an enlightened thing or it may be that the south of Ireland has mistaken conformity with enlightenment.

One of the charges made about young people is that they are politically disengaged, and the charge is generally true. But in the gay-marriage matter and now in the abortion argument, they have weighed in and worked with a passion – a model of political engagement. Why is it that these two social issues have been of such a nature that they have resulted in young people doing what we normally lament they don’t do? Maybe it’s because these are issues that are more likely to affect them directly.

I hope not. Pro-lifers have been accused, sometimes rightly, with being concerned about human life before birth but careless of human life after birth.  It’d be disappointing if young people could be accused of being energised only when matters affect or could affect them directly.

Meanwhile,  the bruised and beaten pro-life side are feeling like Liverpool’s goalie after last night’s Champions League Final. But maybe they should address their concerns to the post-birth population, as should the pro-choicers. Those pushed to the margins of Irish society deserve our compassion just as much as the unborn.  Besides, politics should be about attending to  the needs of others rather than self.

View all posts by Jude Collins →
The spin’s the thing
The Repeal of the Eighth: is the north next?