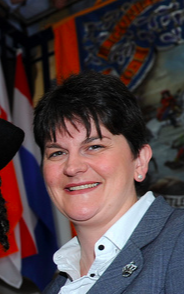 I hope this finds you well and that you’re not suffering excessively from the current  heat…Yes of course I’m talking about the weather.

I have taken the liberty of writing to you because I’m fearful you may be about to set out on a path that can only end in disillusionment and tears. I’m referring  to your declaration that you’ve received emails and other forms of communication from nationalists and republicans disillusioned with the repeal of the Eighth Amendment to the Irish constitution, and planning to vote for your party, the DUP, as the only northern party with a firm no-abortion platform.

There is no doubt that there are some unhappy republicans who believe Sinn Féin should have positioned itself in opposition to abortion, like your party. And there’s a logic to saying that if you’re opposed to abortion, you will vote for the party that agrees with you on this topic.

Unfortunately, as you probably are aware, it’s not that simple. The position of any party on abortion is an important plank in their political platform. But it’s only one plank. Like other parties, you have a range of policies. You have a line on constitutional change , for instance, which by definition is not shared by nationalists and republicans. You are maintaining in government the Tory party, which is busy dismantling the National Health Service and is responsible for the financial havoc of the Universal Social Credit. These things are part of the bread-and-butter issues which politicians keep telling us to focus on.

Beyond bread-and-butter, I see some headlines are reporting your plans to lead an Orange march in Scotland this year. Let me be gentle, Arlene: it’s probably not too good an idea to try winning Catholic votes at the same time as you’re heading up an anti-Catholic organization’ s parade.

There’s also the uncomfortable memory of your former party leader, Ian Paisley, denouncing the head of the Catholic Church as the ‘anti-Christ’ and the Great Whore of Babylon. And then there’s that crocodile remark you made yourself, and the removal by your colleague Paul Givan of funding for poor students to attend the Gaeltacht. Add to that a series of misunderstandings around Red Sky, around NAMA and at present around the Renewable Heating Initiative, and you have a some pretty good reasons for Shinners and others to vote for anybody but your party.

Yes, I had heard your party colleague Ian Paisley Jr saying that he has a letter from a priest, telling him that he commends your party’s stand on abortion. This has echoes of his father, who liked to produce former priests with Italian-sounding names who would reveal the cunning and superstition that lay at the heart of the Catholic faith. What weakens this particular conversion to your party is that nearly all Catholics, including those actively opposed to abortion, are already aware that the Catholic clergy have among their ranks a number of 24-carat-gold head-bangers. The priest who has written to your colleague Ian Paisley Jr may not be one of those but he also may be. Time, as they say, will tell.

In short, Arlene, I would urge you to be cautious about counting your electoral chickens before they’ve hatched. Because as no one knows better than you, they may well be crocodiles in chickens’ clothing, or even Tronjan horses waiting to be trundled inside the DUP gates where they’ll continue their dastardly work of breaking the, breaking the, breaking the  people in your party for whom equality is an unnatural act.

`I hope you will receive these few humble words in the spirit in which they are offered. I’m sure nationalists and republicans accept the sincerity of your stand against abortion, but they have to balance that with your commitment to equality and respect for other cultures, and with the last two you have to agree, your record is not terribly encouraging.

Finally, think what resentment might stir in your political heartland, were they to find that you had invited the tail or claw or snout of the Shinner crocodile round for tea. Remember the words of your former Party leader: “Go ye out from among them!”

Swift’s ‘Modest Proposal’ – has it anything to say to us today?
The Conquistadores visit Cantrell Close