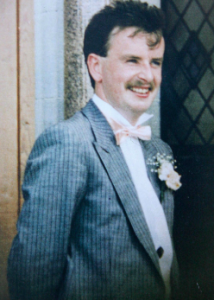 So – after waiting thirty years, the family of Aidan McAnespie are to have their day in court. In 1998, Aidan McAnespie was crossing a border-point at Aughnacloy, when he was shot dead by a British soldier. The soldier claimed that he had been moving the machine gun, it was wet and his finger slipped. After thirty years, the soldier is to be charged, not with murder, but with manslaughter involving gross negligence.

At the time – 1988 – and over the years since, details around the case have emerged. There are claims that McAnespie, like many young Catholic men in the area, was constantly harassed by the ‘security’ forces. The belief was that this aimed to pressure these young men into leaving the district and emigrating. “They say things like ‘Got any bombs today?” one of of McAnespie’s football teammates, Seamus Singleton,   claimed shortly after McAnespie’s killing. Aidan’s father claimed that a short time before his son’s death, one of the soldiers pointed to a gun and said to him “There’s a bullet in here for your son.”

The fact that the case is being brought (after three decades) has aroused again the question of imbalance in cases against former British soldiers. Emotional Conservative MPs have conjured up pictures of their aged constituents being dragged in their grey hairs from retirement homes to face prosecution. As I said on the Nolan show this morning, this prosecution picture faces a number of obstacles, two in particular.

The PSNI Assistant Chief Constable, Mark Hamilton, said last year that he didn’t believe the police were disproportionately focusing on one group. “We’re carrying out our duties according to the law and according to what we’ve been asked to do and required to do.”

Last year also the then Director of Public Prosecutions, Barra McGrory QC said he strong rejected any notion that there was some sort of witch-hunt against ex-soldiers. “The simple and clear reality is that we deal with cases as they are referred to us, in accordance with the Code for Prosecutors. There is no imbalance of approach within the PPS.”

The PSNI Legacy Investigation figures bear him out. Of 1,188 killings being investigated, 530 cases are attributed to republicans, 271 to loyalists, 354 to ‘security’ forces, and 33 are unknown.

Even if you leave aside such figures, a simple recollection of the years of the Troubles tell you who felt the force of the law and who didn’t. Republicans served, in toto, thousands of years in prison. How many members of the British army, the RUC, the UDR? Did any soldier serve time when 14 people were  mortally wounded after being attacked in broad daylight by the Parachute Regiment in Derry on Bloody Sunday? Did any member of the same regiment face legal proceedings, let alone prison, for the Ballymurphy massacre in 1971? And then there are the many instances of British army collusion with loyalist paramilitaries, particularly the Glenanne gang.

Why are people like Doug Beattie of the UUP so keen to protect “old soldiers”? I’m sure his heart is full of compassion for his aged comrades. But I’d suggest it may also be part of a determination to present the past as a place where there were guys with white hats and guys with black hats. The white hats were the British army, the RUC and the UDR. The black hats were the IRA. To bring prosecutions, however late in the day, against ex-British army soldiers risks damaging the black and white narrative.

Many young Catholics in town reportedly were encouraged to move to America, Australia and even England because of harassment from Unionists. “They say things like ‘Got any bombs today?'” reported one of McAnespie’s teammates, Seamus Singleton, shortly after his death. A Catholic priest, Rev. Joe McVeigh, stated that sons from large families were especially targeted for harassment in the hope they would encourage their families to leave.[1]

McAnespie was an election worker for Sinn Féin, but both the Provisional Irish Republican Army and his priest said that he was not involved in any paramilitary activity.[2]

He had previously said that he had been threatened by the security forces,[8] and, according to his sister, soldiers had threatened to kill him on several occasions.[9]

McAnespie’s family allege a cover-up by the British government and question the likelihood of accidental discharge killing their son from a distance of 300 metres.[10] His father, in an article in the Observer Magazine, claimed that a soldier had stopped him some fifteen months before the shooting and told him, “I’ve a bullet here in the gun for your son Aidan”.[7]

n October 2008, the PSNI investigation concluded that Jonathan Holden’s gun required 9 lbs of pressure to pull the trigger, and that the soldier’s account of the events was highly unlikely. It described the chances of this occurring, combined with hitting McAnespie by accident as, “so remote as to be virtually disregarded”.[14]

manslaughter by gross negligence over the 1988 killing.[16]