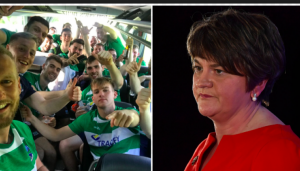 I turned on the TV yesterday and there was Arlene Foster, applying make-up to her face. The commentary told me she was intent on presenting the human face of the DUP, with the various initiatives she was undertaking: showing her friendliness towards the Irish language, visiting LGBT groups, going to the GAA Ulster Football Final.

It’s easy to be cynical about these matters but it’s  actions that matter. You can say you favour good relations with people different from you, but you have to show this from what you do. Yes of course there’s a political element involved – no politician performs a public act without thinking first how it will play out for the public. But that’s politics. So maith thú, Arlene – well done. You acknowledge that these different cultures are of importance to your neighbours. You don’t just talk about it, you do something.

There is one other matter affecting reconciliation that Arlene might want to  look at in terms of its effect on her neighbours and that’s the Orange Order. Sinn Féin’s line on it, which is that of most nationalists and republicans, I imagine, is that it’s a traditional unionist organization, there have been ugly scenes in the past, but the number of problem marches have diminished with time and now there are virtually no Orange marches which are contentious.

I was discussing this with a republican last night and I chose to differ. I think the Orange Order, in its origins, its history and its rules is an anti-Catholic organization. What’s more, the notion of such an organization marching 2,000-3,000 times every year, re-routing traffic and using up police time,  is well into Monty Python country. If they put knotted hankies on their heads and had them wear sleeveless Fairisle sweaters, the picture would be complete. I’m not suggesting that all or even most Orangemen are sectarian. I’m pretty certain the great bulk of them see the Twelfth and other marching days as simply an occasion to break the summer monotony rather than to stick it to their nationalist neighbours. But you only have to look at the swagger of an Orange march band to see that sectarianism is built into this organization.

If the former First Minister finds that’s not possible, maybe she should take a cue from Melania Trump and wear a jacket to the Ulster Football Final with “I really don’t care – do U?” on the back of it.

View all posts by Jude Collins →
Stephen Collins and the Great Liberator
Has Jacob got it right?