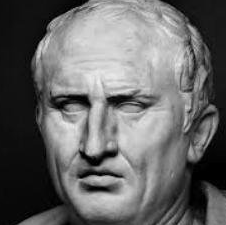 Thus the late Marcus Tullius Cicero, a gentleman with whom I was slightly acquainted  in my youth. He was a man of many letters, one of which – “De Senectute” may well be more relevant to my current condition.Translated into Ireland’s Second Official Language, Sacs-Beurla, literally “The Twittering of the Saxons” the passage says “To be ignorant of what occurred before you were born is to remain always a child.”

A sad, sad situation you may think. But, consider a child on its way to be born who is denied that natural deliverance. Not exactly an improvement.

But to return to M. T. Cicero whose passage continued with the question –

“For what is it worth of human life, unless it is woven into the life of our ancestors by the records of history?”

Before you genuflect to my great erudition I’ll be honest and admit that I was reminded of Cicero’s remarks by my friend Jack Lane, who may yet gain fame in the end – so daring and honest his work. Unlike Irish Governments who declared a decade of Commemorations in 1912 and would have completely obliterated  the memory of the leaders and insurgents of the 1916 Rising had there not been a public outcry. Unlike History Professors and academics seeking Chairs in the Irish Universities who vie with each other in theories about history rather than addressing history itself. And those theories for the most part do not accept the fact that, by use of the ballot box in General, Municipal , County Council, and other elections, between 1918 and 1922 the Irish people established a Democratic State, and were punished for their temerity by Britain’s terrorist Government. Though Sinn Fein had won 73 of Ireland’s 105 Parliamentary seats, Major Bernard Montgomery, serving in Cork, where Sinn Fein had won every Parliamentary Seat, declared he didn’t care how many houses he burned to defeat Sinn Fein. Yet you won’t have fashionable historians acknowledging such interesting facts.

On August 8 1914 the House of Commons in London passed the Defence of the Realm Act without Debate. It forbade newspapers to oppose the declaration of war made four days or to criticise the Government and imprisoned critics, such as Bertrand Russell, without trial. The law covered the whole of the United Kingdom and was used in Ireland for years after the Great War was over.

I sometimes suspect that if it is not in force to this day, many journalists in Ireland believe that it is.

From 1919 to 1922 Dail Eireann published, almost daily, accounts of happenings in Ireland which disputed the stories put out by the British Government. Those who prepared idid so at the risk of their lives. The accounts were in THE IRISH BULLETIN, run off on Gestetner type printers, on foolscap sheets, and posted from various scattered postboxes to journalists and politicians in various countries. A group of honourable British MPs with distinguished records in the Great War, used question Ministers and put them on the spot in Parliament, about the misdeeds of Crown Forces in Ireland.

Contributors to the Bulletin included Erskine Childers, Desmond Fitzgerald (father of Garret), Robert Brennan (later Irish Minister in Washington) and Frank Gallagher (later Editor of the Irish Press). It was a brilliant team.And depended on a network of hundreds of citizens, including IRA officers throughout the country.

In the nearly 100 years since then you might imagine that a University Faculty would have compiled a selection, if not a complete reprinting of such a seminal publication. Or that the Irish Government, which owes its origin to those who were involved in its vital work, would have commissioned a reprinting during this Decade of Commemoration.

Those decadent institutions have done no such thing. But three volumes have been reprinted with no help from them, covering  July 1919 to January 1921 by the Aubane Historical Society and the Belfast Educational and Historical Society, a voluntary, unpaid bodies of public-spirited citizens. Further editions are being prepared for the period ending in January 1922.

History is no longer a core  subject in the schools’ Junior Cycle in the 26 Counties. It suitsthe powers that be that our young citizens will never acquire mentalities above that of the youngest infants. They will thus be qualified to lead and administer the Brave New Republic of the New Establishment’s ambitions.

View all posts by Jude Collins →
The Aidan McAnespie killing: another witch-hunt?
Stephen Collins and the Great Liberator