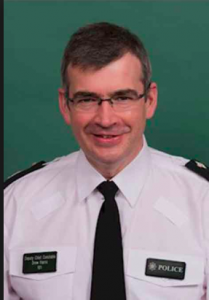 There are a number of angles from which we could regard the appointment of Drew Harris as the new Garda Commissioner.

One is that it’s an inspired choice, omigod, he’ a biggie in the north’s police force and look, he’s just crossed the border and is going to be the top cop down south, it shows how well the two police forces, OK  services, police services, how well the two get on together. And if we keep doing this, who’s to say we won’t soon have an all-Ireland, sorry, all-Island police force and we’ll  get on so well together. Besides, he’s a break with the past and that’s unique and courageous of those who appointed him.

Chairperson of the Policing Authority Josephine Feehily said her agency was “very satisfied” to recommend Mr Harris to Government for its consideration and approval. She was “heartened”, she said,  by the number of internal and external candidates who had put themselves forward for consideration.

There’s a lot of good-will towards him: he’s described as quiet, inclusive, married with four children. Conor Lally in today’s Irish Times says “ His must be seen as a new tenure, a true break from the past.”

Well yes. He certainly has a past to break with. His father, like the newly-appointed Commissioner, was a member of the RUC, and was killed by the IRA.In 2012, he gave controversial evidence to the Smithwick Tribunal in Dublin. It was investigating possible Garda collusion with the IRA in the murders of RUC officers Chief Supt Harry Breen and Supt Bob Buchanan in March, 1989, shortly after they left Dundalk Garda station. Harris has worked closely with MI5, Earlier this year, Harris and PSNI Chief Constable George Hamilton were cleared of allegations of criminal activity and misconduct in public office, after an investigation by the North’s police ombudsman into complaints over a PSNI bribery inquiry. The new Garda Commissioner has been awarded – and accepted – an OBE from Queen Elizabeth. He’ll be paid well over €200,000, although it remains unclear if he’ll actually live in the south. He was seen as central to the arrest of Gerry Adams in relation to the death of Jean McConville in the weeks preceding a general election. Mr Adams was released a few days later.

So rather than a completely new broom, chosen after an international trawl, Drew Harris does appear to have a considerable history, much of it controversial. And he’s going to head a police force in the south that is thigh-deep in its own controversy over corruption and lies.

Harris come to a tough job for which he will be very well paid. His appointment suggests those appointing saw him as the best person for the job. So here are a few questions the people of the south – and north – should be given answers to. After all, as Garda Commissioner he’ll be paid out of the public purse.

View all posts by Jude Collins →
Sectarianism: is it the individual or the institution?
TRIAL BY JURY, HABEAS CORPUS, PEACE BY ORDEAL by Donal Kennedy