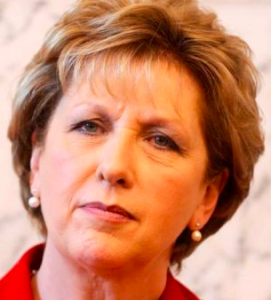 Former Irish president Mary McAleese appears to have travelled some distance from her Catholicism in recent years. If you look for her in the ranks of the World Meeting of Families in Dublin in August, which Pope Francis is set to attend, you’ll look in vain. She won’t be there, because she believes it has “become a political rally rather than a religious and spiritual experience.” She will, however, be joining in the Dublin Pride march next Saturday under the BeLongTo banner “with the members of our own family, straight and gay, young and old, we’ll all be there.”

And if that doesn’t put some space between her and the average Sunday Mass goer, her views on baptism will. She believes that the babies being baptized by the Catholic Church are “infant conscripts who are held to lifelong obligations.”

She explains her reasons for saying this: “You can’t impose, really, obligations on people who are only two weeks old and you can’t say to them at seven or eight or fourteen or nineteen ‘Here is what you contracted, here is what you signed up tto’, because the truth is they didn’t”.

I hesitate to differ from a truly thoughtful woman with a highly-trained legal mind, but I think she’s out of touch with the average Catholic family. I don’t know of any Catholic parent who would have argued with their child or teenager that they must follow the teachings and commandments of the Catholic Church because, years back, they were baptized. In my experience, young people make up their own minds whether they’re going to follow Catholic Church teaching or not, without giving their baptism a thought. What’s more, I’d like to see the parent who has tried to tie their teenager to Church teaching by claiming they were contractually bound at baptism. I mean, come on, Mary.

I think the former Irish President would have had a stronger case against baptism if she’d queried the notion behind Catholic baptism itself, which is Original Sin. It’s not hard to see that human beings are capable of the vilest things – you could start with President Trump and his fondness for taking children from their parents – but I’d suggest it’s impossible to see how a new-born infant would be seen as in need of spiritual cleansing. We talk about someone being “as innocent as a newborn babe” for a good reason – they are innocent. They may grow up and become sinners and need cleansing, but when they survive that dangerous place, the womb, and are delivered fresh to the world, it doesn’t take a lawyer to conclude they are sinless.

The fact of the matter is that when children are young, parents who love them try to make decisions for them that they hope will make their lives fuller and better. They’d be heartless parents if they didn’t. When the child grows to adulthood, he or she starts making the decisions about his/her life and the parents step back.

So if Baptism is a welcoming of a child into the Catholic Church, and parents believe that within the teachings of the Church will be to the infant’s benefit, that’s not conscripting anybody. They’re simply making a decision they think is in the child’s best interests, just as they do when they clothe them and feed them and send them to school. When the child becomes a man or woman, s/he may decide to continue in the faith their parents equipped them with or they may decide they want no part of it. They’re now capable of doing that and, as I say, sensible parents step back and pass life responsibility to the young adult.

But the belief that Baptism is a ceremony where the child, burdened with Original Sin, must be cleansed, is in my view tosh. The notion that a loving God would consign to eternal pounishment a non-baptised infant is literally unbelievable.

So if Mary McAleese wants a barney with the Catholic Church, she’d be better starting there rather than talking about child conscripts.

View all posts by Jude Collins →
Pinning the Brits down, lifting mercury with a fork and related matters
Saturday Pics of the week