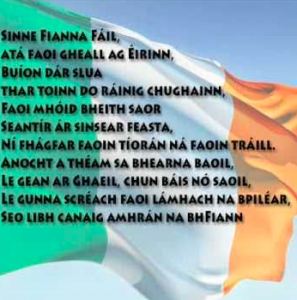 Following Dr Varadkar’s Prescription of A New Constitution For A New People, Fintan O’Toole, the  Paid Piper of The Irish Times, followed by some of his younger admirers, if not a plague of rats, has called for the scrapping of Amhran  na bFhiann/  A Soldier’s Song , the anthem of those who have given allegiance to the Irish nation for the best part of the past century.

In these entrepreneurial days I can envisage many poetasters salivating at the prospect of making a killing at the public’s expense. However there exists already a song encapsulating the sentiments of Mr O’Toole and his disciples.

It is called WHACK FOL THE DIDDLE.

By happy coincidence it was written by Peadar Kearney, who also composed A SOLDIER’S SONG. As Mr Kearney has long been rested in Glasnevin he would  be unlikely to  seek royalties.

Of course some atavistic fanatics, averse to change may expect the newly adopted anthem rendered  in  ERSE.