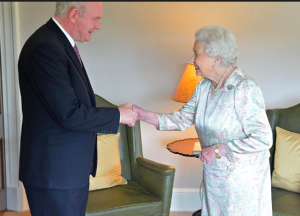 Watching the opening match of the World Cup, I was impressed by the cordiality
between  the elected President Putin of Russia and the Crown Prince of Saudi Arabia as together they watched Russia defeat Saudi Arabia by five goals to nil.

I was rather taken aback by the main cartoon in THE TIMES the next morning which depicted President Putin kicking a football in a field covered in blood.

Not only taken aback, but taken back six years to another meeting of elected and non-elected dignitaries which prompted conflicting comments,

They followed a meeting in Belfast which prompted a snotty letter from Cork’s Montenotte  thanking God that the Queen had been wearing gloves.

Immediately below was my own contribution –

“Two newspapers with long imperialist Traditions, THE IRISH TIMES (June 26) and THE TIMES of June 27 carried cartoons of a be-gloved Queen Elizabeth shaking hands with a bloody-handed Martin McGuinness.

What Bloody Nonsense is This? When Martin McGuinness was a young child the Queen’s agents were up to their necks in blood. In Kenya alone in the first eight years of her reign, they hanged over 1,100  Africans after farcical trials. All the perfumes of Arabia could not sweeten such episodes.

Perhaps Lady Macbeth’s failure to wash the bloodstains from her hands accounts for the tradition of later Queens wearing gloves in public?”

Last week television viewers were treated to pictures of Saudi Arabia’s bloody war in the Yemen, which has been waged for about five years without much coverage on our screens and no adverse cartoons in THE TIMES. Britain supplies many billions of pounds worth of arms to Saudi Arabia, and those billions now play the role of the perfumes in Macbeth’s time. I understand that Saudi Officer Cadets train at Sandhurst and that it is not uncommon for British NCOs to be given such trinkets as Rolex watches from some of their oil-rich former pupils.  Local Government and National Health Service are forbidden accepting any but the most trifling presents from the public.

The day following the publication of my letter, a lady from Howth, a professed teacher of etiquette, wrote a po-faced piece on the origin of royal and other aristocratic ladies wearing gloves, but it had no bearing on good manners, unlike a letter from a Mr Duffy of Dublin on the circumstance which gave rise to the Handshake.

It was a meeting of Co-operation North in Belfast, which McGuinness attended in his role as Joint First Minister in the Northern Assembly. The two Patrons of the Assembly, President Higgins and Queen Elizabeth attended. Both are Heads of State. Mr Duffy said that the video was unedifying, as President Higgins seemed to be ignored by everyone except by the Deputy First Minister Martin McGuinness.

In my review of Jude’s “Martin McGuinness -the Man I Knew” I observed how most commentators commented on the good manners, consideration and courtesy of that born gentleman. Mr Duffy noted it too.

But it is a shock to think that Ireland’s First Citizen at a formal event  could be treated like a Spare Private Member at a wedding.

View all posts by Jude Collins →
A NEW ANTHEM FOR A NEW PEOPLE? OR AN OLD ONE? by Donal Kennedy
PULPIT   FICTION by Perkin Warbeck