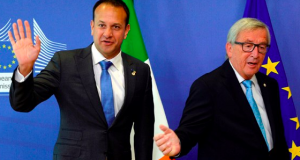 So – with glacial speed, the British-Irish Intergovernmental Conference is to meet next month. There have been people – leaders of the SDLP and of Sinn Féin for a start – who have been urging that this should happen.

The first is the matter of Brexit and the border. The two governments have obligations as signatories of the Good Friday Agreement to see to it that the present arrangement of the invisible border is maintained. Perhaps the British are a bit shy of discussing this matter in Brussels, so nearer home would be a good place for them to explain to the Irish government just how they hope to maintain this invisible border.

Secondly, the British government  might also want to explain what the delay is in drawing up a legal document that gives official status to the famous backstop. Only last night An Taoiseach made it clear that the British border in Ireland would have to be resolved and that there was no question of a temporary back-stop, as the British have been hinting, and no question of a sort of in-between condition applying. “You have to have all four freedoms” Leo Varadkar told press. “Not one freedom, not three and a half freedoms – all four freedoms.” Failing in that, he said, would lead to the break-up of the EU.

Strong words. So what are the Four Freedoms? That’s easy: the freedom of movement of (i) Goods; (ii) People; (iii) Services; and (iv) capital over borders.

The big sticking-point for the Brits is the matter of freedom of movement of people. It’s allowed the likes of Nigel Farage to insert a notion that there are immigrant hordes on Britain’s borders, about to over-run it, and so they’re particularly keen to avoid complying with that one.

So if you were going into that room as part of the British-Irish International Conference, what would you ask the Brits?

I know what I would ask:  why haven’t you allowed the famous back-stop to be put into legal, binding language, since you’ve agreed to it informally? Or are you twisting and turning in the hope that the back-stop will remain informal and make it easier for the Brits to say it wasn’t a backstop just for the north, it was for all of the UK; that they had been talking all along about a backstop that would be in place for a short while, so that everyone could draw their breath.

It’s a simple enough matter: there must be a legal document on the backstop, and it must have no time-limit involved.  Leo and his European chums need to stop kicking that particular can further down the road. Because when it comes to October, who’s to say the Brits won’t declare that the back-stop was no more than an idea that was once discussed but has no longer any relevance? Worse still, could our chums in the EU sacrifice the back-stop for some other matter that’d make British withdrawal smoother?

With the appointment of Drew Harris a Garda Commissioner, it should be clear that the party which signed up to partition may not be wearing the green shirt but may have slipped on a blue one when no one was looking.