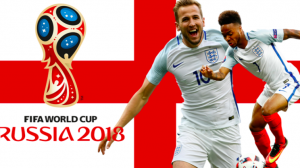 Well, that’s it – England are going to win the World Cup. Who will they face in the quarter-finals? And the semis? And who will be their victim in the final? As the hackneyed hacks often say, only time will tell.

When the team travelled to Russia, the British press were full of praise for its youthful make-up, the way it’d bonded, the relaxed atmosphere in the training camp, the understated quality of the team manager Gareth Southgate. Expectations were realistic, the commentators told us: this was a young team, and participating in the World Cup would give them priceless experiences.

Now, having won their first two matches, scoring six goals in the second game, all that’s changed. England, someone said last night, are 9-2 to win the World Cup. They’ll definitely be through to the next round and with a team which has such quality, particularly captain Harry Kane, the hopes now know no limits.

It’s at this point I must ‘fess up: like thousands of Irish fans, and Scottish fans, and Welsh, I get a singular kick out of seeing England’s balloon punctured on the international stage. Unsporting, I agree. Reprehensible. But this so-wide anti-England attitude must come from somewhere. Maybe because in history, England has bossed Scotland, Wales and Ireland about, not infrequently at the end of a rifle. For all its fake modesty and proclaimed fairness, England in its gut feels the rest of us are an odd sort of variation of what normal people should be, which is of course English. And their withering contempt for the Ireland team using the granny rule is profound: imagine, using the rules of international competition to field your best team!

So in the absence of the Ireland team at the World Cup, I’m relying on Fate to let England get through to at least the semis. Not because I have a soft spot for them, but because – yes, shameful I know – there’s nothing I enjoy more than seeing them implode on the really big stage.

Besides, Kane, Maguire: what the hell are Ireland scouts paid for?

View all posts by Jude Collins →
STEPHEN COLLINS, THE JESUITS, DANIEL O’CONNELL, FATHER SEUMUS MURPHY, RICHARD PIGOTT by Donal Kennedy
Sectarianism: is it the individual or the institution?