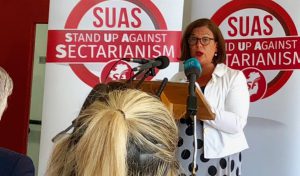 I was at the launch of Sinn Féin’s Stand Up Against Sectarianism yesterday. It was a beautiful morning and the sentiments expressed boiled down to a simple truism: you can’t be a republican and sectarian at the same time. In her usual business-like way, Mary-Lou McDonald talked about rolling up sleeves and tackling this age-old problem head-on.

If you tackle the matter as an individual, you will be following in the thought-footsteps of Trevor Ringland, who believes we should all take One Small Step that moves you away from this social cancer. Which is commendable. Except that if that was the way to have ended the Troubles, all we’d have needed was to stop being nasty to each other. Unfortunately, the root causes of the Troubles went deeper than individuals. Ending the Troubles was only possible because new and better political structures were put in place. And they were brought down, not by individual failure, but by institutional stupidity and corruption.

The same applies to sectarianism. There are three factors that are bigger than any individual and they need to be addressed.

The first is segregation. In the Sinn Féin document anti-sectarianism document, there is a reference to “sectarianism and segregation”. They’re not the same thing but they’re linked. Our education system is overwhelmingly segregated into Catholic and state/Protestant schools. Does this mean the schools are sectarian or encourage sectarianism? I don’t think so. On the other hand, when people grow up apart from others, there is a tendency to think of them in stereotypes. So should all our schools be integrated? Perhaps – except that most parents want them to stay the way they are.

Then there’s segregated housing – again, around 90% of us, of all classes, live in areas where people have a similar religious background and similar political thinking to ourselves. There have been valiant efforts made to increase mixed housing, something not helped by the troglodytes who stick up UVF flags in such areas. Again, living apart from each other doesn’t mean we’re sectarian – but it does make it easier to avoid thinking of the other lot as individual humans rather than some clichéd mass. Unfortunately, the great majority of us like being with our own lot.

But the elephant sitting on our chests is the third – the Orange Order. As I’ve argued to the point of yawn-induction, I believe the Orange Order is an anti-Catholic – in other words, sectarian – organization. When I say this, people like David McNarry throw a hissy-fit and start name-calling before rushing from the radio studio. Others say I don’t understand the nature of the Orange Order. But none of them has advanced an explanation of the Order that would suggest it was and is anything other than sectarian in its origins, its history and its regulations. What to do?

Leo Varadkar appears to see the solution in being nicer to the Order, visiting them and being politely interested in their history (the non-toxic parts). Arlene Foster, having attended a GAA game, has now called for republicans to respond in kind towards the Orange Order. Which is misleading in two ways, since it implicitly draws an equivalence between the GAA and the Orange Order (which there isn’t), and it assumes that the Order is a noble institution, sadly misunderstood by nationalists and republicans.

I wish I didn’t believe that the Orange Order is sectarian. And I don’t believe many or even most of the Orangemen and their families who attend marches, particularly on  the Twelfth, are sectarian. Far from it, in most instances. Even the Eleventh Night bonfires aren’t surrounded solely by sectarian lager-louts. But I cannot see how the Orange Order as an organization is other than sectarian, and if someone can explain to me how it’s not, I will be more than happy.

Unfortunately,  I don’t see much sign that the sectarianism of the Order will be addressed: Sinn Féin stresses that very few of the Orange marches today are “contentious”, which is true: most pass off peacefully. But there are still thousands of marches by what looks very like a sectarian organization.

So there you have it. Three major areas – education, housing and the Orange Order – which pose a massive challenge to those who are keen to actively challenge sectarianism. And I can’t see change in any of the three, least of all the Orange Order, in the foreseeable future.

So help, please. Is there a way in which these major roadblocks can be dismantled,  without those with vested interests doing a David McNarry?

View all posts by Jude Collins →
Rule, Britannia !
Drew Harris: the best man for the job of Garda Commissioner?