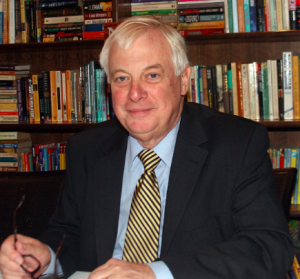 How are you regarding the Catholic Church? Are you against Pope John Paul II because he was strictly orthodox in terms of Church matters and punished those clergy who stepped out of line? Or have you forgotten to factor in his out-spoken concern at the obscenity of war, no matter who was waging it?

And how are you with monarchy? Do you think it’s an absurd system that gives the job of Head of State to whoever pops out of the relevant Windsor loins, regardless of abilities? Or maybe you’ve forgotten Queen Elizabeth’s bent head at the Garden of Remembrance in Dublin, and her famous statement about wishing some events in the past had been handled differently or had not occurred at all?

What I’m getting at is that problems, like people, are complicated, multi-layered. I don’t agree with a word out of Gregory Campbell’s mouth but I find him a friendly, smart man. The same goes for Jamie Bryson. Which brings us, with a fairly large leap, to Chris Patten, who gave a talk in Dublin yesterday. In the course of it, he delivered a killer line about Britain’s decision to withdraw from the EU: “It has invariably been true that if you are not at the table, you are on the menu”.

It’s well-packed, grimly humorous lines like this that cut through the garbage and waffle and excessive detail we’re fed by those for and against Brexit. Patten, a Conservative, has always been aware of the depths to which the UK stabbed itself when it voted for Brexit. Since, he has tried to argue the case for European inclusion, but in a Europe that has addressed some of the major weaknesses which led to Brexit in the first place.

Patten, you’ll remember, was the man who took our society from the dark days of the RUC to the somewhat brighter days of the PSNI, for which relief much thanks.

However, we have to balance Patten’s many good qualities with the fact that he’s a member of the House of Lords, which in its origins and make-ups is non-democratic. More immediately, we need to remember that the title of Patten’s talk in Dublin was ‘Ireland, Britain and the Challenge of Nationalism’. I haven’t seen the text of Patten’s speech, but I’m willing to bet that it doesn’t touch on the ways, over the centuries, Britain has sought to expunge the very concept of Irish nationalism. What’s more it’s still going on, aided and abetted by many of those who listened to Chris Patten in Iveagh House in Dublin yesterday. What’s more, they’re still at it.

Maybe  enlightenment can sit side by side with benightedness because we kid ourselves that one or the other isn’t there. Deep down, we all love our movies to be black and white.