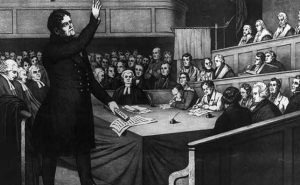 RICHARD PIGOTT, the forger, whose fake letter was bought by THE TIMES, which was acting for Lord Salisbury, the then British Prime Minister, wanted the money to pay fees to Clongowes Wood College, for one or more of his offspring. I would like to think that the Jesuits did not cash the cheque, which arose from the British Government’s desire to associate Parnell with incitement to murder.

Daniel  O’Connell, who was sufficiently decent a man to earn the hatred of THE TIMES, in 1815 shot John D’Esterre dead in a duel, had as his second, a respected Co. Clare gentleman known as “Fireballs” MacNamara, who reportedly had a brace of pistols nicknamed “Bas gan Sagart” or, in Sacs-Beurla, “Death without a Priest.”

Duelling had been endemic in Ireland amongst the gentry, particularly amongst Barristers as the memoirs of Jonah Barrington, for one,  recalled. And O’Connell, who was a member of the Bar, considered himself a gentleman. You’d think any Irishman who considered himself a  scholar and dared to cite O’Connell would be aware of those facts.

The Irish Times carries a column under the heading Rite and Reason. A couple of years back under that heading it carried one over the name of Seamus  Murphy SJ. The Order has as its motto “Ad Majorem Dei Gloriam, echoing the admonition of St Paul, “When you, eat, drink, or whatever else you do, do it for the Greater Glory of God.”  St Paul also says that whatever virtues you may have, without love you have nothing. Seamus Murphy SJ is a Professor of Philosophy. He opened has article with a sneer at the 1916 Insurgents, who gave their lives in witness to the love in their hearts. Then he compared them to their disadvantage to Daniel O’Connell, whom he asserted never shot anyone.

Not only did O’Connell shoot one man dead in 1815, but in the same year he was arrested on his way to Ostend in order to take up a challenge from another. Not someone like d’Esterre who was probably unknown beyond Dublin. But that buttress of law and order, Sir Robert Peel.

It seems to me that Father Murphy and the Irish Times are partners in Tripe and Treason.

A short study of the tycoon William Martin Murphy by another Jesuit outlines the industry, intelligence and piety of the man, who used pray for his opponents such as James Connolly, but sneers at the latter as a “martyr”. The inverted commas were those of the reverend author, who appears to me to have had an inverted or perverted sense of moral values.

I learned lately that Stephen Collins, whom I have long thought as mad as a hatter is associated with the Jesuit journal “Studies.”

I also learned lately that a great-uncle of mine, who had a distinguished career in the Antipodes, had an article in purple prose published in “Studies” back in 1912. I might get to read it some time. He was Jeremiah Murphy SJ, a native of Kilkenny.

View all posts by Jude Collins →
Has Jacob got it right?
Rule, Britannia !