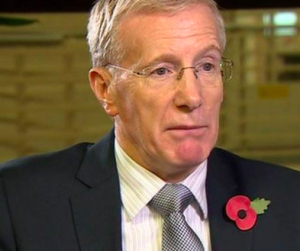 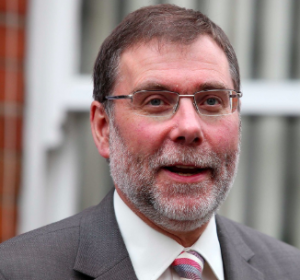 There was a time when politicians in Ireland lived in fear of saying or doing something that would earn them ‘the belt of a crozier’ – a Catholic bishop criticizing them in public.

Gregory Campbell of the DUP has no such fears. In fact, on the Irish Examiner’s website yesterday, he’s the one that’s doing the belting, and it’s Bishop Donal McKeown, the bishop of Derry, who’s on the receiving end of the belt..

Bishop McKeown’s political sin? He has referred to ‘the disadvantage’ of some of the young rioters in Derry. He has also condemned their violence, but has set it in the context of their ‘disadvantage.’ Gregory doesn’t like that. ““Many people who are law abiding and raising families, despite lots of disadvantages, are deeply concerned at the bishop’s comments which, however well-meaning, could  be interpreted as  a rationale for rioters.”

Gregory is citing the argument that people who engage in violence don’t have to do so, that there are lots of people in the same circumstance who don’t. I don’t think Bishop McKeown in disputing this; he’s pointing out that the lives of these rioters are those of disadvantaged people in our society, which is true and obvious. Has there been much rioting recently in Derry’s Culmore Road area? Or in Belfast’s Malone Road area? Every time you encounter rioting, you can bet your house it’s happening in disadvantaged areas. What Gregory’s doing is flying the DUP flag for the people who see these rioters as feckless scum (if scum can be feckless), and at the same time doing that age-old crowd-pleaser: giving a Catholic bishop a good belt. The fact that Gregory’s indignation is manufactured doesn’t enter into the matter.

Meanwhile, in Thursday’s Belfast Telegraph, my good friend Nelson McCausland (one of the least sectarian politicians I have come across) is arguing that we should all give more money to the Orange Order. He complains that nationalists are far too quick to criticize any funding for the Orange Order: “This was in marked contrast to nationalist support for the £8m from the Treasury in London for Irish language centres, a pot of money which enabled them to lever in twice that amount, creating a total investment of around £25m.”

There are  two aspects of this that Nelson appears to have forgotten about, so let me, as friend to friend,  remind him. The first forgotten factor is the financial cost to the public purse of policing the thousands of annual parades which mark the summer months of every year. The second is that the Orange Order is an  anti-Catholic organization, founded on the dead bodies of some thirty Catholics in 1795, repeatedly over the decades attracting rioting and general public disorder. If the money my good friend Nelson cites is going to a comparable nationalist anti-Protestant organization with a history of violence for the past couple of centuries and more, maybe he’d let us know what they’re called. That done, we could arrange for some more millions to be tipped into the Orange Order bowler hat.