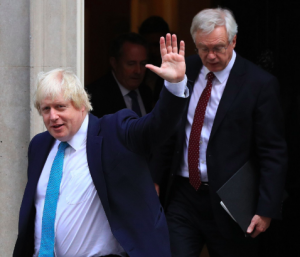 As Oscar Wilde almost said, to lose one Cabinet minister is unfortunate, to lose two looks like carelessness. We were still drawing our breath at the exit over Brexit by David Davis, when word arrived that Boris Johnson had taken his ball and gone home as well. It looked as if the British government was imploding.

And maybe it is, but not just yet. There can be few people with two or more brain-cells who believe that Boris was making a good job of Foreign Secretary. And there are equally few who think David Davis is the best negotiator since King Solomon. So the fact that they’re gone leaves Theresa May with a Cabinet which appears more loyal to her and marginally more sane.

So two overblown egos out of the way for now – although they’ll be back, or certainly Boris will be. Meanwhile, Theresa will be free to forge ahead with her vision of a softer Brexit – won’t she.

Alas, once again, she’s surrounded by people who want to make her life more difficult. One of them, Nigel Dodds, was on his feet in the House of Commons yesterday urging Theresa to clarify about the permanence and solidity of “the backstop”. Except that Nigel was talking about the backstop that’d see no impediment on trade between the north of Ireland and GB. Mrs May assured him there’d be no impediment. And here was me, thinking all along that the backstop had to do with north-south relations – that Britain had guaranteed there’d be no change in the freedom of trade and movement throughout Ireland. It appears that all the time it was really about freedom of trade and movement east-west, between the north of Ireland and Great Britain. Silly me.

But there are still massive difficulties between the UK and the EU. Theresa May is in danger of seeing victory in terms of persuading the members of her Cabinet to accept the terms of the document the UK is sending to the EU. Not so. Victory would be if the UK managed to persuade the EU to accept the terms of her document. And that won’t just be difficult, that will be impossible.

Because Theresa is hell-bent on going along with the freedoms she likes and jettisoning those she doesn’t like. She’s OK with the movement of goods, it seems, or at least some goods, but she’s not OK with the movement of services. And yet it’s only a week or so ago  I heard Leo Varadkar state very explicitly that the UK couldn’t have three of the EU’s  four freedoms, or one of the four freedoms, or three and a half. You either went with all four or you didn’t go at all. It’s the free movement of goods, services, capital and people, or it’s nothing.

So it’d be a safe bet that if this document gets out of May’s Cabinet intact, it’s going to get torn to pieces when the EU are finished with it.

May is relatively safe for the moment, but they’re coming for her. And they’ll get her, if not this year then next. And far from being an improvement, whoever takes her position will almost certainly lead a party and a country that seem to be searching for the self-destruct button.