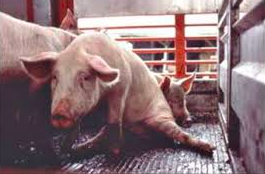 THE TIMES (of London) never ceases to amaze me.  Its lead story (30 July) is headed “Farm animals tortured under Red Tractor label” and, no it’s not a reprint from The Cold War, nor even about Putin’s Russia, but a horror story from Bedfordshire, where “piglets” as the locals term  banbhai/bonnavs , are regularly goaded with electric prods and killed by being swung by the hind legs and killed by having their heads smashed against a wall. The unfortunate creatures are then sold to the general public in supermarkets, if lucky, or passed to the Bullingdon Club for further defilement. Okay, that last bit is mild surmise. If true it would come under The Official Secrets Act.

I found the account horrifying, and distressing. And when I think of the pig’s head in the Bullingdon Club, he must have been left with a bad taste in his mouth.

In the same issue of THE TIMES I found-

Andrew Griffith writes; ‘One August day in the early 1990s I was collecting straw bales from one of Lord Carrington’s  fields. Like many Lloyd’s names, I was embarrassed by the losses. While we were loading, Carrington drove up to see how we were getting on. Looking at me with an impish grin he said ‘I hope you will pay me an absolute fortune for the straw.’  I said ‘I would love to ,but some  gentlemen at No 1 Lime Street seem to have lost a  lot of money.’ I was never sent a bill.’

THE OBITUARY of Carrington which appeared in THE TIMES on 10 July was one of general approval, but did admit that he was instrumental in arranging for the torture of prisoners and their internment without trial in 1971, and that he approved of the conduct of the Paratroopers who murdered unarmed civilians in Derry in January 1972.The Obituarist apparently had no moral reservations about Carrington’s crimes against humanity. But he recognised that they resulted in hundreds of hitherto peaceably inclined youths joining the IRA and the prolongation of suffering for a further quarter century. At heart the Obituarist presents, like Carrington, as a nurdering swine.