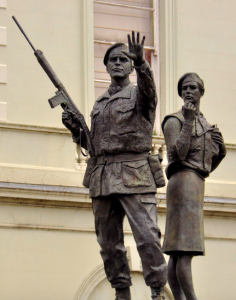 I was on the Nolan Show on BBC Raidio Uladh/Radio Ulster on Tuesday morning,  and there was a man called Sammy speaking. He told how, as a 12-year-old boy, he saw his father being forced to his knees, then shot in the head. I missed whether Sammy’s father was in the ‘security’ forces, but in either case it was a harrowing tale. Sammy is from South Down and he was objecting to a march ‘glorifying’ hunger-strikers from that area.

His tale is a sad one, and sadly familiar. However, as I tried to point out, there are a number of matters that Sammy and other unionists might want to keep in mind.

The men being commemorated were hunger-strikers. They were also paramilitaries, but that’s not why their names are remembered and honoured. It’s because of the courage and sacrifice they showed in fasting to the end in pursuit of their status as political prisoners that they are honoured. And as hunger-strikers, the only violence involved was the violence that fasting to death did to their bodies.

I didn’t get to talk to Sammy but I did get to talk to Kenny Donaldson, of Justice For Innocent Victims. Kenny told me I was wrong, that the hunger-strikers were responsible for other violence, and he cited a Protestant milkman and his son who were caught up in rioting in the aftermath of hunger-strikers’ deaths, crashed their vehicle and died. I tried to point out that this wasn’t violence meted out by the hunger-strikers, but in vain.

As Kenny and Sammy saw it, any respect paid to these men was to honour violence. I noted  that Martin McGuinness had been an IRA commander and proud of it, and wondered if Kenny felt that Arlene Foster, Peter Robinson and others not have paid their respects and attended his funeral? I could have been more profitably employed talking to a butterfly in my back garden.

The Good Friday Agreement says that everyone has a right to remember their dead with dignity and respect. Clearly this is something that unionism takes seriously, for in the middle of the city of Lisburn, there is a large group statue which commemorates the UDR. If the South Down commemoration of hunger-strikers causes pain to the loved ones of innocent victims, what effect does that statue have on the loved ones of innocent victims of the UDR?

Looked at rationally, the only possible way to come to terms with our past is to accept that all sides suffered pain and inflicted pain, and that all sides have the right to remember lost loved ones and to honour those they see as courageous figures in the Troubles.

Nationalists and republicans appear to have little difficulty with this. However, a section of unionism seems to find  it impossible to accept that picture of the past. For them the problem was the violence of paramilitaries, particularly the IRA. Their blood-lust created the Troubles and their blood-lust should be condemned, not commemorated.

I know pain can cause people to see things in a distorted way, but this vision of the past verges on hopeless caricature. Why presenters and commentators don’t interrogate this one-sided vision is a mystery to which only they know the answer.