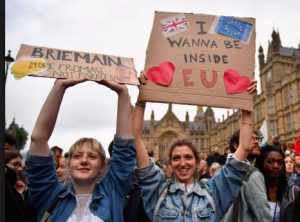 The worst charge that can be laid at unhappy Remainers is that they want the British public,  to think again: step forward, EU Referendum Two. At the very idea,  Brexiteers break into red-faced fury. The remote toffs are at it again! Pulling the strings and refusing a clear democratic decision. “Do you want us to be like the Irish republic?” the Brexiteers demand. And indeed,  quite a few Irish people felt uneasy when the southern state state said No to the Lisbon treaty, then some   eighteen months later they voted again and the answer was Yes.

But was the second Irish referendum on Lisbon a simple anti-democratic back-flip? Not quite.  The EU introduced a number of protocols (addy-on bits) that addressed some of the south’s fears from the first referendum. So they weren’t actually voting on the same Lisbon treaty a second time; they were voting on one that had been modified in the light of their concerns. Not perfect but not a repeat either.

Which brings us back to the Brits – or to be more preceise, England and Wales, since Scotland and the north of Ireland voted to remain in the EU. The south of Ireland voted differently on Lisbon the second time because there were new provisions available to them, new information that made Lisbon more attractive. Is that the case with the Brits and Brexit?

You betcha. They know now what they didn’t know when they voted to Leave. They know that the famous £350 million a week extra for the NHS was a simple lie. They know that even the prospect of Brexit means the pound has taken a pounding: which means your European or American holiday is going to cost you seriously more than it was supposed to, and even going to Dublin for a match or a weekend is costing a helluva lot more, because of the sinking pound sterling.

And all the indicators are that, especially if Britain crashes out with no agreement, there will be massive implications. Some big companies have already moved to the south of Ireland or to the EU mainland. The predictions from all the economic and financial experts (and don’t say ‘What do they know?’ Virginia. They may not be your choice for being locked in a lift with, but they do know some things) are that Britain will take a massive hit financially if it crashes out. In other words, things are bad now and they will get worse. A lot worse.

Mercifully, he message seems to be getting through. Polls now suggest that a majority of British people, if they had a rerun of the Brexit poll, would vote to remain. Summing the situation up rather well and throwing in a piece of advice at the same time,  Professor Robert A Rogowsky from the Middlebury Institute of International Studies at Monterey in California says that ““responsible leadership in London should reveal the cost of Brexit and get a proper ballot in place to confirm that British voters are willing to pay for it”.

Jeremy Corbyn, a word of advice: go for a second referendum and you’ll be into No 10 quicker than it takes to say “Take that, Daily Mail scum!”.