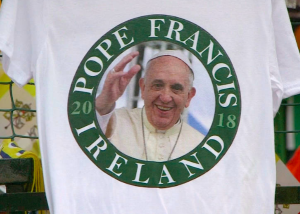 Here’s a hypothetical situation for you. You’re working for this big firm as a very junior clerk. Your line manager is a total arse – well no, not a total one. With other people in the firm he’s charming and witty. With you, when you’re alone, he bullies you, he shouts at you, he thumps you Ad then, one day, he rapes you.

Q: What would you do?

A: Ask a silly question. You’d probably tell your colleagues and maybe some higher-ups in the firm, but that would only be over your shoulder as you made a beeline for the nearest police station in the company of a solicitor and maybe a doctor, and lodged a charge against this cowardly cur.

Which brings me to Pope Francis and his visit. No, Virginia, I ‘m not saying the Pope is a cur. I’m talking about the Pope and the incidents of clerical abuse in the Irish Catholic Church. The Pope yesterday talked to a number of clerical abuse victims and referred to their abusers as “caca” – shit. Quite right, Your Holiness. Shit on a stick.

There has been a lot of talk about what the Pope should do about clerical abuse, and whether he’s a man of gestures but little substance, of words but not actions. Colm O’Gorman has voiced this view more than once (although he was on BBC Radio Ulster/Raidio Uladh this morning  and he mentioned in passing that he was not a member of the Catholic Church and so it wasn’t his place to tell the Church what to do or not do. Who knew?).

But while it must be of concern to any organization, clerical or otherwise, if people in its ranks are sexual predators, it is the job of the police to deal with such matters, not  (primarily at least) the organisation. So why is there such an emphasis on what Pope Francis did or didn’t do in terms of bringing these shits to book? Given that Francis isn’t a policeman, shouldn’t he pass the matter over to the legal authorities? More obviously, shouldn’t Colm O’Gorman and other victims have headed straight for the police station and instituted legal proceedings themselves?

In moral matters, I might strongly disapprove of someone’s actions but there’d be nothing I could do about it legally. In other cases, what is morally reprehensible is also illegal, so there should be a lot of things I can do about it. Starting by calling in the cops.

Some clerical abusers have been charged and imprisoned. I can see how the victims of abuse would feel let down by the Catholic Church, or at least the Catholic clergy. I cannot see why they don’t direct the police to the address of their perpatrators, and aren’t loudly complaining about police inaction.