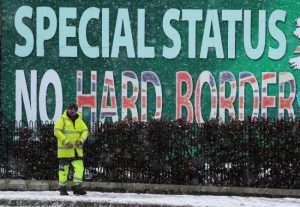 How do the DUP feel about the border? It’s both easy and hard to say.

Easy in that they believe in it totally, because if there was no border there’d be no Northern Ireland. The fact that for years we’ve been able to travel freely throughout Ireland doesn’t change the fact that there is a point where one state ceases and the other begins.

What’s hard to say is what kind of border the DUP want. You could ask them and they would almost certainly say they want a seamless, soft, whatever-you’re-having-yourself border, but in republican and nationalist minds there’s a serious doubt about whether that is true. Do they really like the fact that, at present, you can’t tell which state you’re in? Doubtful. But do they want the return of barriers, customs posts, checking of people and vehicles? That seems hard to believe, because it would have an obviously damaging effect on cross-border trade and hurt DUP businesses as much as the business of any republican or nationalist.

The UK has tried to solve the conundrum by suggesting that all of the UK should receive the special status that the EU has offered the north. And the north would for all intents and purposes be in the customs union and the single market, and so indistinguishable from the south of Ireland, and so there’d be no need for a border in Ireland.

But while the EU are happy to give the north special status, it’s not going to give the whole UK similar status. Logic would then demand that there be a border in the Irish Sea – that the north would receive special status, while Britain in a post-Brexit state would receive no special status. But the DUP have declared they won’t accept that. There’s going to be no semi-detaching of the north from the rest of the UK (Yes I know, Virginia, I know – there are all sorts of differences between this sad little North-East Nest and Britain, but you mustn’t refer to that.)

But hold! There is one other possibility. Theresa May has said a border in the Irish Sea, differentiating the north from the rest of the UK would be something neither she nor any British prime minister could accept. But has Britain ever gone back on its word before? Only last December, we had the famous back-top, declaring there’d be no change in the present trading set-up between the two parts of Ireland. Already May has said that the only other alternative to a hard border in Ireland – one in the Irish Sea – is simply not on.

So here’s the thing. Might it be that at the last minute, Theresa May will simply agree with the EU that the north should have special status, and sign on the dotted line?   If she does, the DUP in fury will pull the plug on their arrangement with May’s government. But what good will that do them? Either they’ll get May – or Boris or Jacob – back again as Tory PM, with the same attitude; or they’ll get Jeremy Corbyn, and you may be sure he’ll keep as much deep green water between himself and the DUPers as possible.

The DUP would then have to consider how to act, having been forced out of lock-step with the rest of the UK and having had special status thrust upon it. If things were to come to that point, there’d probably be a hard core of loyalist/unionists who’d thrash around for a while, but since they’ve already been pretty comprehensively infiltrated, it shouldn’t take a big operation to mop them up. The rest of the unionist population would look at things and see that having special status was actually quite nice, especially when the alternative was considered.

Most sane people choose financial stability in preference to eating grass; and although some would dispute it, I believe most DUPers favour a grass-free diet.

View all posts by Jude Collins →
1918 – A PIVOTAL YEAR FOR I RELAND ? ON FIRST LOOKING INTO DR. GIBBONS’S REFLECTIONS by Donal Kennedy
NEVER MIND THE QUALITY…. by Donal Kennedy