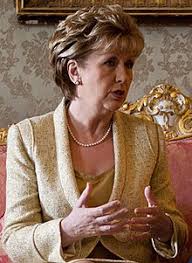 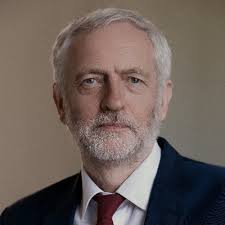 Do you remember the time back in 2005 when Mary McAleese became the target of ferocious criticism because she compared the Nazis’ hatred of Jew to prejudice against Catholics in our NEN? It was so ferocious, she quickly apologied publicly. “The words I used were clumsy. The last thing I would want to do is to create the impression that sectarianism came from only one side of the community.”

This morning she must be listening to news bulletins about Jeremy Corbyn and murmuring “I feel your pain, Jeremy”. Because Corbyn is facing a roaring wind of criticism for, in 2010, having spoken alongside people who are said to have compared the actions of Israel in Gaza to the Nazis. The Campaign Against Anti-Semitism (CAA) has said “The evidence shows beyond all doubt that Jeremy Corbyn is an anti-Semite and the Labour party has become institutionally anti-Semitic.”

There are a number of reasons why McAleese and now Corbyn have been attacked with such ferocity. During WW2, some six million Jews were systematically killed by the Nazi regime. The state of Israel was set up as a home for Jews. Most if not all Jews throughout the world support the state of Israel.

The record of Israel in terms of the Palestinians is undisputed. Over 5 million Palestinians live in an area roughly the size of Fermanagh. They live in poverty and total subjection. Since the year 2000, Israeli soldiers have killed some 10,000 Palestinians.

Clearly in terms of scale, comparisons between the Nazi killings of Jews and the Israeli killing of Palestinians are wildly disproportionate. No matter how you do the Maths, 10,000 is a long way from 6 million.

But Mary McAleese wasn’t talking in terms of numbers killed. She was talking in terms of children being taught to hate the Other. In that respect there is a comparison, and if you look at Mary McAleese’s retraction, she says she spoke clumsily, and that sectarianism isn’t just one-sided, but she doesn’t say the comparison is valid – which it is. Teaching hatred to your children is teaching hatred to your children, even if the contexts are different. That’s not to say that all Protestants teach their children to hate Catholics – that’s patently nonsense. But there are sufficient numbers of Protestant children who have picked up from somewhere a visceral detestation of all things Catholic. Else why the many KAI signs? And the slogans and images on many Eleventh Night bonfires?

Jeremy Corbyn is having a harder time than Mary McAleese. He’s being accused of being anti-Semitic because at various points in his career, he sat on a panel with people who attacked the actions of the state of Israel.

And it’s here that the nub of the problem rests. Most Jews throughout the world support the state of Israel. When someone criticizes the state of Israel, the claim is often made that it springs from a hatred of Jews, and, feeling guilty because of the horror that was the Holocaust, the person frequently retracts.

They shouldn’t. To say that the Israelis are acting with shocking inhumanity towards the Palestinians is a fact. Their inhumanity is not on the same scale as that of the Nazis, but the oppression and killing of defenceless people is the same.

Corbyn’s political enemies have weighed in on this claim of anti-Semitism – I understand Boris “Picaninnies” Johnson has added his brazen voice to the baying pack. They can only do this because people equate criticism of the state of Israel with hatred of Jews. That equation is a lie. The Jews throughout the world know this, the political enemies of Jeremy Corbyn know this, the political enemies of Mary McAleese and nationalism know this. But when you fear and detest the opposition enough, you’ll use any weapon available. And the anti-Semitic weapon has been amazingly handy.

It’s time it was decommissioned.