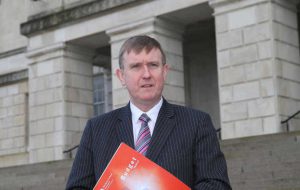 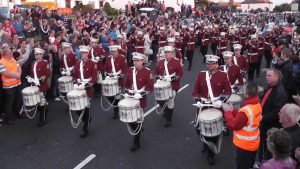 Tuesday is a desperate day. The glow of the weekend has faded, you’re facing into the same old slog of work , you wonder why you picked this path in life and if there shouldn’t be something more –anything more – than this overcast greyness.

Cheer up, I have a belly-twisting laugh on its way.

The DUP MLA Mervyn Storey, according to the Belfast Telegraph, has declared a Parades Commission ruling on a band parade “illogical and unreasonable”.

Why so? Because the Commission has imposed several conditions on the Ballymaconnelly band parade in Rasharkin on Friday.

And those conditions are? “That it must finish by 9pm, that a maximum of 25 bands should participate and that participants and supporters of the parade must refrain from using ‘sectarian or threatening’ words.”

As you probably know, some 75% of the Rasharkin population is from a Catholic background. Which I would guess might not be totally unconnected with the commission determination that no more than 25 bands should march through it.

Mervyn Storey says the Parades Commission are a disgrace,  should resign en masse. But he doesn’t expect they will: “Rather they would prefer to listen to a collection of Republican groups who are unelected and unaccountable and who can’t even agree amongst themselves.” (Some of the residents are prepared to accept the Commission ruling, some others think 25 bands through their village is a bit much.)

The Parades Commission lets us know what this parade through Rasharkin involves:

“Objections to the parade focus on its large scale of 25 loyalist bands in a small residential rural village of approximately 1,200 inhabitants. Disruption from the parade, protests and associated policing occurs from mid-afternoon on the day of the parade to late evening, with local roads around the village partially or fully closed for a period of time.”

And more? “The Commission has also determined that the two protests of 50 participants are each limited to 25 participants.”

So pour yourself another cup of coffee, lean back, look out the window at the world, and thank your Maker that you weren’t born to be a resident of Rasharkin. Or, if you think of it, Mervyn Storey.