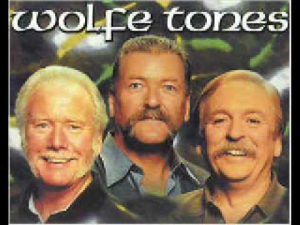 I’m just off the Nolan Show on Raidio Uladh/Radio Ulster, where they’re highlighting a Wolfe Tones concert where there was, apparently, the waving of Irish tricolours with ‘IRA’ written on them and chants of ‘Ooh aah, up the RA!’

Isn’t it interesting that of all the hundreds of events that occurred during Feile an Phobail, this and Gerry Adams’s Negotiators Cook Book are the only ones given real media attention?. Otherwise, the mainstream media didn’t seem much to notice that Ireland’s biggest summer school was happening.

My point on Nolan was that the chanting and IRA-daubed flags shouldn’t have happened. Our national flag should be respected, and the IRA have gone away, you know. But at least the flags and chanting happened in the heart of republican West Belfast, not through the streets 3,000 times each year, or pausing to march in circles outside a Protestant church – all at the cost of millions in police time alone and the further cost of damage to community relations.

Chris McGimpsey, an intelligent and articulate man, was also on Nolan. He argued that this concert with the Wolfe Tones last night had essentially destroyed all the good things that had happened in the Feile, (or ‘Festival’ as he called it.)

Come on, Chris. You know there were dozens of interesting and informative talks, debates, exhibitions and other events throughout the fortnight, and that a few ooh-aahs in the final night don’t change that hugely successful fortnight. And remember, the Feile sprang from a determination to take young people in nationalist areas away from 15 August bonfires and the sectarianism related to those bonfires. The Feile succeeded and is a massive achievement  which the media, to their shame, turn their faces from year after year. Unless, of course, they find something to be outraged about, like Gerry’s Cook Book or the Wolfe Tones and a few ooh aah up the RAs.

Come on, Chris and other unionist leaders. Stop appealing to the Deliverance base which would keep us all mired in the bad old days which you and others told us you longed to leave behind.