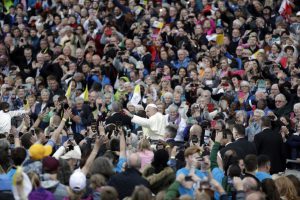 There were two things stressed during the Pope’s visit to Ireland: the numbers coming out to see him, and the Pope’s response to victims of clerical sexual abuse.

You don’t need to have a people-counter to tell you that fewer people lined the streets, fewer appeared in Croke Park or the Phoenix Park than when John Paul II came in 1979. On the other hand, to suggest that the Catholic Church in Ireland is a mortally-wounded institution is to exaggerate somewhat. Tens of thousands braved the elements and, judging by TV pictures, radiated happiness that they’d done so. Such images are likely to give heart to those who are at present almost embarrassed to admit that they are practicing Catholics.

As to the victims of clerical abuse: Pope Francis appears to have been genuinely shocked to hear some of the stories when he met with victims of clerical abuse. What actions should he add to his apologies for the brutal assaults on children and young people? Demand clerical resignations? Compulsory laicization for guilty priests? Financial support for victims/survivors? Certainly those hurt by the Church remain to be convinced that all that could be done has been done. Yet there are people within the Catholic Church who’ll tell you that the vigilance and safeguards against abuse are now so strict, the accusation of clerical abuse is the near equivalent of conviction for clerical abuse.

There is little doubt that many Catholic priests feel demoralized and even demonized. Because of the crimes of their colleagues, the general public view all Catholic clergy with a degree of suspicion.

This is unfair but understandable. More disturbing is the exclusive focus on the Catholic clergy. Comparative figures are hard to come by, but those there are suggest that Catholic clergy are no more likely to engage in sexual abuse than clergy in any other faith.

In the US since the mid-1980s, insurance companies have taken to offering insurance against sexual misconduct charges. They reckon that Catholic clerics aren’t a higher risk than clergy from other faith groupings, and insurance for the Catholic Church isn’t any higher than that for any other Church – or any other organization such as Scout leaders or teachers.

So why the near-exclusive focus on Catholic clergy in this matter? And why, when they are focused on, is it not stressed that those accused of sexual misconduct involving children amount to some 4% of all Catholic clergy?

As for cover-up, show me the grouping in society – universities, the police, business, political parties – which doesn’t instinctively close ranks when it senses an attack from outside. That doesn’t make cover-up in the Catholic Church right, but it might make us realise that the obsession with sexual misdeeds in the Catholic Church ignores comparable misdeeds in all areas of society.