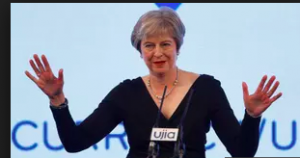 These are dangerous times. There are a number of dangers but most of them are rooted in Brexit, which for Ireland (and I do mean Ireland, not the 26-county state) is a crisis and an opportunity point.

The crisis part is becoming more obvious every day. Last December Theresa May committed Britain to the famous backstop: that in the case of no better solution being  found, the backstop would mean that the customs union and single market would still operate between the north and south of Ireland.

Having made the commitment, Theresa May has been busy back-pedalling from it, saying that it would lead to the break-up of the UK. She might be right but she also has gone back on her word. But then what did you expect from a Tory PM? She’s also totally opposed to a border in the Irish Sea – that is, EUland in effect including all of Ireland but not Britain.

Michel Barnie, the EU negotiator, has been making conciliatory noises, noting that at present there are checks on agricultural goods going from the north of Ireland to Britain, and that the EU would be open to the idea of UK inspectors checking goods coming into the UK or leaving the UK for Ireland.

We stand, to paraphrase Robert Frost or even Terence O’Neill, at a cross-roads. As Brexit moves to ignition point, this could have results which would whet the appetite of many Irish people, including some unionists, for a border poll – and should Brexit prove the car-crash some are saying it will be, that poll could well lead to a united Ireland. The other road is where the EU comes to an agreement with the UK so that Brexit is handled in a way that does least possible damage to the UK and the EU.

But the big danger is something we all know but would rather leave at the back of our heads. It is that the EU, consulting its own interests, will do a deal/mix a fudge, where the north of Ireland is pulled out of the EU against its will and trade between north and south becomes chaotic.

One road points to economic disaster which could provide the opportunity for a border poll; the other leads to an agreement between the UK and the EU that allows the invisible border in Ireland to continue as is. That might seem to take us away from a border poll, but one thing the Brexit debate has made clear: everyone – Britain, the north of Ireland, the south of Ireland – is agreed that an economically united Ireland makes very good sense. That argument having been won, the case for a politically united Ireland begins to sound like a no-brainer.

If Winter comes, can Spring be far behind?

View all posts by Jude Collins →
Palestinian and Kuwaiti rights at Roger Casement Summer School by Dave Alvey
Would you buy a used car from this government?