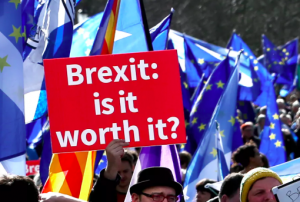 Just when you think the Brexit thing can’t get any more intriguing, something new happens. There we all were, watching Theresa May do her British bulldog imitation at No 10 yesterday, in an attempt to distract from the slap in the gob she got from  the EU a day or two early, when whaddyaknow? Another major Brexit avenue opens up.

The Labour Party has its annual conference in Liverpool today and there should be some interesting developments. In an eye-catching YouGov poll of Labour members, it was found that there is huge support – nearing 90% – for a referendum on the outcome of Brexit negotiations. Around the same astonishing percentage said that if a referendum were held today, they would vote to remain in the EU. The GMB union general secretary, Tim Roache, will speak at today’s conference. His view: “A People’s Vote (second referendum) is not only the right thing todo for jobs, public services and the future of our young people – it’s the best way to get a radical Labour government.”

And Jeremy Corbyn, always seen as a bit iffy about Europe, has said he’ll get behind whatever members may decide.

The thing is, is there time? The UK at present is scheduled to cut the ties that bind at the end of next March. A People’s Vote would have to take place after a general election, we’re told.  Maybe  the idea is  to shame the Tories into calling an election, if the majority of people are calling for  another referendum.

It looks very like Labour is going to become the second referendum standard-bearer. As I see it, it’s a no-brainer. To say “The people have already spoken and want to leave the EU” suggests that the people can’t change their minds – once decided, that’s it. Follow that logic and you’d have one election  – the people have spoken. No more elections. Dumb and dumber.

Of course, calling AND WINNING a border poll in Ireland would solve the whole thing for us. Britain could fold its tent and wonder how long it would be before Scotland called for the same thing. That’s the problem with power, particularly insecure power: you spend your days fretting and your nights sweating. But then, to quote yet again the great political philosopher Regina Doherty, they brought it on themselves, didn’t they?