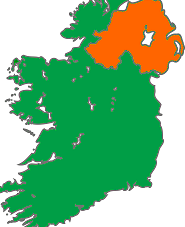 There has been much talk recently – mainly in The Irish Times – about the dangers of treating the the famous back-stop as “a green and orange issue.” Agreed, the present UK-EU impasse is about much more than Irish nationalism and British unionism, but at the heart of it lies the “green and orange issue.” How else can we interpret the fact that the DUP is dictating the tune to which the Tory party dance, leaving the rest of us fearful that a hard border will not just stifle commerce but re-ignite political violence?

If all other things were equal, the DUP would be happy to erect a very hard border. This would make it clear to the world and particularly anyone crossing the border that they were leaving one ‘country’ and entering another. Likewise in the good old bad old days, unionists took a keen satisfaction in seeing the south of Ireland as a primitive bogland, its thinking dominated by priests and bishops, its economy a basket-case. They saw themselves as open-minded and up-to-date, with better roads, a better education system and a better health service. That this was possible through the giant annual subvention from Westminster, and that the northern state wouldn’t last five years without this life-support system from London, didn’t enter into it.

Now, unionists must face up to a transformed set of circumstances. The south is the fastest-growing economy in Europe, with its figures for growth revised upwards only yesterday. There is a danger to this but one that northern unionists must wish they had. The education system in the south has weaknesses but it also has strengths which the northern curriculum lacks. So unionists find themselves doing what they’ve always done, holding tight to Mother Britain’s hand. Unfortunately, Mother Britain is leading them towards a hard border and state-wide penury. Avoiding a hard border means maintaining the present invisible border in Ireland, which as business people unionists welcome but as loyal-to-Britain die-hards they fear. A blurred border, northern demographics and southern prosperity awaken the eternal fear of unreconstructed unionists, that in a day not far ahead, the title ‘unionist’ will be confined to trade union activists.

You can’t separate economics from politics. The prospect of a hard border should make that clear to anyone, even the editorial writers of The Irish Times.

View all posts by Jude Collins →
SPIES: SAINTED OR TAINTED? by Donal Kennedy
If you hate the Labour Party, clap your hands