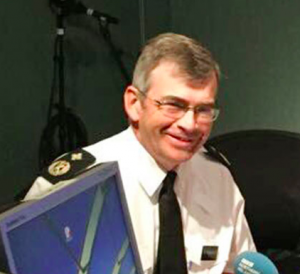 I have just listened to an interview on RTÉ Radio One with Josephine Feehily, the chairperson of the south’s Policing Authority. I caught only a snatch of it, but she appeared to indicate that Drew Harris, the new Garda Commissioner, was the best person in the world for the job. They searched and searched, she said, nationally and internationally (maybe she means the north by ‘internationally) and Drew Harris was the best person they found.   Harris, we’re told, took up his duties one minute after midnight last night.

A little bit about his background. His father was an RUC superintendent who was killed by the IRA in 1989. He himself was Deputy Chief Constable of the PSNI, where he was link man between the PSNI and MI5. It is generally believed that he was the man who gave the order to arrest Gerry Adams  just before an election in 2014.  He swore an oath of loyalty to serve Northern Ireland and the United Kingdom. He has now sworn a new oath, to the Garda and the Republic of Ireland.  He will be paid some €80,000 more  in his new role as he had in his past role in the north – a  comforting €250,000 in toto.

This new appointment raises all sorts of interesting questions. Does his new oath automatically cancel out his first oath? Will the British intelligence service information which he carries around in his head also be expunged,  particularly when, as Garda Commissioner, he looks at cases like the Dublin-Monaghan bombings and British ‘security force’ collusion? Or will he, following his new oath, make available to the southern state all the information he has acquired as link man to MI5?

Drew Harris is 51 years of age. Like his father, he has to this point devoted his energies to the welfare of the north and of the UK generally. Will he be able to shrug off all that life-time of devotion (assuming he wanted to) and dedicate himself exclusively to the people and police of the south?   If you asked Leo Varadkar, he’d probably give a little smile and tell you “Of course he will – he’s a man of high ability and he has taken an oath to do so.”   But then,  that’s presumably what was believed in the north when he got the Assistant Chief Constable job in 2014 and swore the oath of loyalty to Britain.

There are only two ways you can look at Harris’s appointment: that it is an outward sign of the increasing unity of things generally and the police in particular in Ireland; or that there is at least  a risk that Harris will gentle divert any investigations around and past any information that might make the RUC or Her Majesty’s government at the time look bad.   I know which I think more likely, and I’d say the majority of Irish people think likewise. But that won’t  bother those who appointed him or Drew himself. He may even hum the old promotion song: “The working class/Can kiss my ass/I’ve got the foreman’s job at last.”