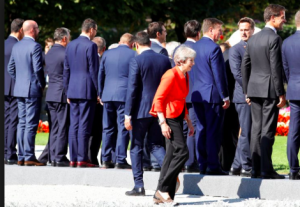 Look. I’d be one of the first to engage in a thigh-slapping round of  schadenfreude, particularly when it involves a British prime minister stalking ashen-faced around a garden in Salzburg looking like a wounded giraffe, while all the other (almost all male) prime ministers turn their back on her. I’d not be beyond punching the air and yelling “Gwanyeboysya!” But I’ll be truthful. As I watched the report from that summit yesterday, I felt sorry for Theresa May.

Mind you, to quote Regina Doherty, she brought it on herself. You can’t go committing to a 100% bullet-proof backstop for the conduct of trade and everything else in Ireland, and then start telling people you can’t have borders in the Irish Sea and recoil from putting your commitment in legal language, and not expect consequences. Yesterday Mrs May got her consequences between the eyes. My main regret was that it wasn’t Maggie Thatcher that was left facing the cameras with her political bruises and cuts raw and throbbing.

Leo Varadkar must be up with some spring in his step this morning, getting down to the gym, buying his latte, in at his desk before sparrows’ fart. He’s just (apparently) persuaded all the European leaders to stand by their Irish man and tell the British prime minister to go to hell or Westminster and bake up a better Brexit cake. If the EU leaders stick to their guns, a frictionless border is maintained and the north of Ireland is saved from the lunatic ravages planned by Jacob Rees-Mogg and his crazy gang, Fine Gael will be able to live off the political kudos of this one for at least a decade.

Maybe that tempers your schadenfreude a little. It does mine.