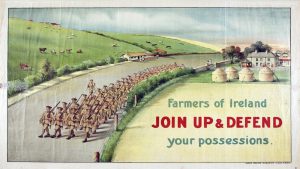 Two of my mother’s four brothers, and the husbands, or future husbands of both her sisters, fought in British uniform in the 1914-1918 war. Ours was not an atypical Irish family. But I would reject the claim that the war was Ireland’s War. It was foisted on Ireland largely by a back-bench member of England’s House of Commons, John Redmond, without consultation with his party colleagues in the Commons or a mandate from the Irish electorate.

In those days if a back-bench MP was nominated by the Prime Minister for a Cabinet position he had to resign his seat and present himself to the electorate for re-election. When the back-bencher Winston Churchill was first offered a Cabinet post (in 1910) he had to go through that exercise, and he lost the ensuing by-election.

No General Election had taken place between 1910 and Redmond’s commitment of Irishmen to the Great Slaughter, an act of gross presumption. No general election occurred until after the 1918 Armistice. When it did, Redmond was dead, and the Irish electorate repudiated his war and his successor as leader of his party John Dillon, and  all but 6 of his party’s parliamentary candidates.

In doing so the electorate endorsed the 1916 Rising as Ireland’s Battle. The Irish Labour Party was founded by the 1916 insurgent leader James Connolly, Fine Gael by W.T. Cosgrave, and Fianna Fail by Eamon de Valera. Connolly was executed by the British for his part in the Rising. Cosgrave and de Valera were sentenced to death for their parts in it.

Strange though it may seem some current members of those parties would have us believe that the “Great War” was Ireland’s War and the 1916 Rising an ill-considered and embarrassing a irrelevance.

These thoughts arise because Brendan Howlin TD, Leader (of Ireland’s!)  Labour Party, insists that the inauguration of our next President, which the Constitution stipulates must be held on November 11, must be postponed so that Ireland may commemorate the Centenary of the 1918 Armistice, and the Fine Gael Taoiseach, while not wishing further to amend the Constitution (for the moment), is equally adamant that the State commemorate the Armistice, as if the “Great War” were Ireland’s War.

I don’t know how, or if, Ireland’s literary and journalistic Establishment plans to remember the Armistice.

At the time most of the men who were, within a few weeks, chosen by Irish voters to govern them, were in British prisons arrested, but never tried, for an invented “German Plot.” One of the prisoners, who had already won a Parliamentary by-election, was Sinn Fein’s founder, Arthur Griffith, Editor of the party’s paper, NATIONALITY. A brilliant journalist Seumas O’Kelly, poet, dramatist, and author of the acclaimed novella – “The Weaver’s Grave” was editing NATIONALITY in Griffith’s absence. On the evening of  11 November  1918 he was alone in Sinn Fein’s Headquarters in Dublin’s Harcourt Street. A mob for whom the “Great War” was “ Ireland’s War” broke into the Sinn Fein office and sacked it and set upon its lone occupant, the unarmed Seumas O’Kelly, who died a few days later from his injuries.

View all posts by Jude Collins →
Loughinisland: tragedy and the role of the police
The tremor as Brexit deadline approaches