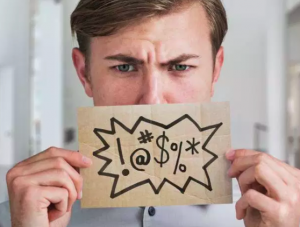 Unlike the Irish, the English, even  in this secular age, are not addicted to blasphemy, nor were they when Joyce wrote Ulysses.The antics of Buck Mulligan scandalised their English visitor at the Martello Tower at Sandycove.

An apocryphal story of a foreigner coming across a game of pitch-and-toss in Dublin had him amazed at the piety of the players, so often did they invoke the Holy Name.

“Gordon Bennett” , “My Godfathers” and “Strewth”  are strewn about vernacular English English to avoid offending, if not the Deity, those of their listeners who are still believers. It’s a sign of good manners.  “Strewth” is a shortening of “God’s Truth” believed to be found in the Bible. The Lord help us! It would not surprise me to find future witnesses, judges and Presidents in Ireland required to swear on a copy of THE IRISH TIMES. Here, I should confess thatI habitually swear at it.

My own godfather was unable to attend my christening in St Andrew’s, Westland Row, because, at the time, late December 1941, he was serving as a doctor in Britain’s Royal Army Medical Corps. Uncle Bill, like his wife Maeve, my father’s sister, was from Cork and both had qualified as doctors in UCC. Maeve, my godmother, was also in England where she lived, worked and died until a few years ago. I believe Uncle Bill was the first RAMC medic into Belsen on its liberation.

Five years before I was born my sister’s godfather, from Cork, another UCC graduate, was an IRA veteran of the ‘Tan and Civil Wars. On the losing side in the Civil War, for the sake of his health crossed the Atlantic, and came home when Fianna Fail came to power in 1932. He took his son, born in California, into the Phoenix Park. Surveying the 1880 green acres the son cried –“But Dad, who waters it all?”

My great-grandfather, Thomas Kennedy, a former shoemaker, then with a small farm and a pub, was in 1880 the godfather of John MacDonagh, a pioneer filmmaker and a scriptwriter for D W Griffith in 1910. MacDonagh director Willie Reilly and His Colleen Bawn in 1920, filmed at St Enda’s, Rathfarnham, in 1920, when he and the actors were trying to keep out of the clutches of the British enemy. The film has been restored and a soundtrack added. It is a full length feature film you can see on YouTube.

MacDonagh also made films of the launch of the First Dail Loan by Michael Collins, and I believe, the 1917 newsreel of the funeral of Tomas Aghas (a relation of the film star Gregory Peck) . John MacDonagh’s, elder brother, Thomas MacDonagh (1878-1916) was godfather to Eileen Kennedy in   1895. Eileen, my aunt, was daughter of my grandfather, Patrick Kennedy (1866-1949). Patrick Kennedy introduced Thomas to the Gaelic League in Kilkenny in 1901.

Thomas MacDonagh, might well be remembered as one of the Magnificent Seven, for he was one of the septet who signed the Declaration of Independence in 1916. He died on May 3rd 1916 and his death was more significant than that of more numerous victims of firing squads depicted in Goya’s painting of the 3rd May.