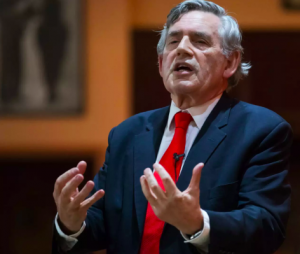 You should judge for yourself. I’m not infallible and you are not being bullied into believing that he [ see above ] is or isn’t. For myself, I have long believed that he is a humbug and a moral coward. It was when I came across a book of essays under his name. Its title echoed one published in John F Kennedy’s name called “PROFILES IN COURAGE.”

One of Brown’s profiles was of a Swedish diplomat who used his diplomatic status to save a great number of Jews from murder by the Nazis . At the end the Second World War he disappeared and was believed murdered by Soviet captors in the 1950s. The date of his death was never established nor the names of those who had arranged his arrest and death.

Many books and plays have been written about him, at least one country has made him an honorary citizen (postumously), postage stamps have commemorated him. Statues of him have been erected in far-flung cities, and nearer home, outside a Synagogue by London’s Marble Arch. The man was a humanitarian hero and deserves to be honoured by all mankind.

Another Swedish hero did similar work, saving  numerous Jews from murder by Nazis. After the Second World War he was appointed by the United Nations as an envoy to do its work in Jerusalem. He was murdered there In 1948 together with a French army officer working with him. The man who pulled the trigger became a bodyguard to David Ben Gurion, first Prime Minister of Israel. The man who ordered the murder became Prime Minister Shamir of Israel.

The bodies of both murdered men were flown to Paris, where George Marshall, US Secretary of State, Ernest Bevin, British Foreign Secretary (Labour Party), various French dignitaries and the Secretary-General of the United Nations (among others) had gathered to honour them. The United Nations Security Council condemned the atrocity in the strongest terms.

The murdered envoy was Count Folke Bernadotte, related to Napoleon’s Field Marshal Bernadotte who became King of Sweden at the invitation of that nation. He is commemorated in Copenhagen and Stockholm but, not noticeably any where else. The successors of George Marshall and Ernest Bevin have, quite probably never heard of him. Certainly they have done little to advance the cause he served.