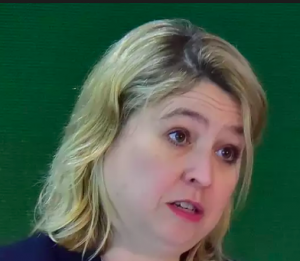 Karen Bradley when last I heard was on her way to the United States. So, as it happens, am I, although I think the similarities end there. Like just about every  British proconsul, Karen is all at sea when it comes to our tormented green corner (TGC). In fact , the average speed bump would probably beat Karen in a pub quiz about our TGC. Karen is doubtless on her way to reassure the Yanks that all will be well post-Brexit and let’s do a massive trade deal. I, in contrast, am on my way to persuade Irish-Americans that their lives will be  incomplete until they have bought a copy of my book of interviews, ‘Martin McGuinness: The Man I Knew’. Oh, and while I’m here, I will check out my latest grandson.

On the book front, experience has taught  me that Irish-Americans may like your book, and even buy it, but what they really want to hear about is the latest twist in Irish politics  – something about which, as some of you may have noticed, I don’t mind sounding off.

The trouble is, so much to say, so little time. Do I need to mention to them that the British proconsul is becoming increasingly irrelevant – in fact, almost like a clueless character that  has wandered into our politics from a Gilbert and Sullivan operetta? Probably not. Do I need to mention that the British government are in shock to learn that the rest of Europe is only amused by their attempts to play the imperial master with them?  Mmm, maybe. Like Irish people themselves, Irish-Americans were for a long time a bit over-awed by British assumptions of benign superiority. But those days are gone. All of us now see that Britain’s Leavers are inhabiting  aJacob Rees-Moggs wet-dream, where the 21st century is really the 19th  and fog in the Channel always cuts off Europe from Britain, not the other way round. And I’ll tell them that more and more Irish people , including many unionists, see the border for the economic suicide vest that it is, and most unionists are looking to the 2021 census with something approaching dread.

A question, Karen: was your journey really necessary?

View all posts by Jude Collins →
Ian Paisley Jr, EU borders and other stuff
FIRST THEY CAME FOR THE COMMUNISTS by Donal Kennedy