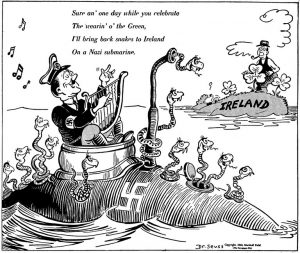 The Palestinian Flag is to be seen on Hill 16 on big match days. That would be the tricolour of three equal horizontal stripes (black, white and green from top to bottom) overlaid by a red triangle issuing from the hoist.

(Topographical note: For the benefit of those who pronounce the k in the middle of Croke, Hill 16 is located in Croke Park. Only folk who have never been to Croke Park pronounce the k. Habitués pronounce it: Crow Park, which is, needless to say, a source of perpetual annoyance to Hawkeye and a possible nod, of course, to the hoarse level of communal singing in the most infamously unfinished National Stadium in the sporting world).

Now, it is a custom in Croker (aka Crow Park) for fans to wave flags of other countries whose colours happen to coincide with their own county’s colours. The first fans to introduce this practice were those of the Peoples’ Republic of Cork, boy: when they began to wave the Red Flag of China (where Lee is the most popular patronymic).

But, which county shares the same colours as Palestine? Black, white and green. No county, but a club. One doesn’t have to look too far to find the club. Cork, boy, is de clue. For the gansey and shorts of their champion football club, Nemo Rangers, are black, green and white..

(The name of this club is worth noting, for it is destined to make a big impact later on when called off the bench mark. Inseofar an scéilín, ar ball beag).

In Libya in the mid 70s it was difficult to enter a post office or a bank without being confronted with queues as long as …lemme me, ah, yis – as long as the Linguistic Lapdog’s long and lonely Intifada against Anglophobia. This was mainly due to the sudden departure of last week’s staff, having been abrupty dragooned into the army for National Service and the replacement staff behind the counter being still in the throes of learning the, erm, tropes.

This meant that one often found onself being tapped on the shoulder while standing in line and getting an earful from the customer behind. Who was invariably a Palestinian in exile. The Balfour Declaration, I declare, was the only topic of conversation in the old town of Tripoli. And one soon almost had it off by heart, albeit with a Palestinian accent. This accent was on the Plantation of Palestine with Zionists in the compulsorily ulcerated land of the Palestinians.

The Balfour Declaration of 1917 was a public statement issued by the British government during The War to end all Wars  announcing support for the establishment of a “national home for the Jewish people” in Palestine, then an Ottoman region with a minority Jewish population (around 3–5% of the total). It read:

His Majesty’s government view with favour the establishment in Palestine of a national home for the Jewish people, and will use their best endeavours to facilitate the achievement of this object, it being clearly understood that nothing shall be done which may prejudice the civil and religious rights of existing non-Jewish communities in Palestine, or the rights and political status enjoyed by Jews in any other country.

(Dear Reader, you will soon have an opportunity below to compare and au pair this Declaration with old LBW’s Lapdog-approved definition of nationality . LBW: Leopold Bloom Westbrit. Bí foighneach, a léitheoir dhil).

Now, Bloody is a prefix common to both Balfour and Sunday. In the latter case it was orignally associated with Jurassic Park aka Páirc an Chrócaigh until a half century or so later it also became a phoenix of a prefix, as it were, in the context of Londonderry aka Doire Cholmcille.

Soon one found oneself mouthing TGIF or rather TAIF (for Friday is the Sunday of Libya) even as one moseyed down the Shara Omar al-Mukhtar in Tripoli studying the eponymous face as it appeared on the Libyan ten-dinar note. One invariably and involuntarily found oneself also baritoning to oneself the following popular song, having first listened carefully to the prevailing note of the muezzin in the minaret of the most proximate mosque.

(The last bracketed line is clearly, of course, an anachronism as it refers to the latest logo of The None-ery Theatre, née the Abbey in 1904: A Banshee taking a Selfie).

Balfie, the barbed shire squire, having already impatiently concentrated on taking out a patent on the Internment Camp in the Boer War to be later put to excellent use elsewhere, including NEN, was the obvious Alpha Male Role Model to serve in the dual role of ZAG ( Zionphile and Gaelphobe).

Thus, while The Palestinian Flag on Hill 16 might at first sight seem like an unlikely Harvey Smith to Gaelphobia this scepticism vanishes when one considers the real continuity role of the Anglophiles in the Free Southern Stateeen. For it was that stunningly cunning cohort that craftily cemented the link (alleged) between the Gael and the Anti-Semite.

As if FOTUS (for it is he !) cannot quite believe his eyes that Anglophobia has not entirely vanished off the face of the Bog Oak Monolith in the Free Southern Stateen. Despite the best endeavours of Clever Clogs himself, during his long, lonely Intifada against The Big A.

It is the Gaelphobes who have stretched The Star of David and his celebration, Bloomsday into a class of a seven-branched candelabrum called the Menorah aka Bloomsweek. We just cannot get enough of the fellow whose feet performed such a feat on June 16, 1904 (allegedly). This Menorah, Norah, is perhaps unique in capital cities around the world, for the oblique way it reeks of reverse racism, and has been made so by the Castle Catholics (nach bhfuil imithe go fóill, tá’s agat / who haven’t gone away, you know):

-Bury our A La Carte on Bended Knee.

Here is what FOTUS (haka Fintan O Toole Uber Shoneen) has to vouch on ‘Ulysses’, this, the Talmud of The Unionist Times, and from which sacred book, the second syllable is unerringly thrown – ouch ! -at the Bog Oak Mononlith by wannnabe rabid rabbis on Liffeyside.

Ulysses may be mock-heroic, but it is also deeply forgiving and staunchly democratic. We get to know all of Leopold and Molly’s dirty secrets, bad thoughts and grubby fantasies, but instead of being lessened by this exposure they are magnified to an astonishing complexity.

This generosity extends to Joyce’s implied vision of what it might mean to be Irish. The three main characters have lived, or have their roots, elsewhere. Bloom, attacked by an anti-Semitic nationalist, insists that his nation is Ireland. Asked what a nation is, he replies, “The same people living in the same place.” And then, being Irish and Jewish, he adds, “Or also living in different places.”

It was not the official definition of Irishness, but, as with so much else in Ulysses, it was a truer one.

Humbling, all the same, to witness a continuity CBS boy of no-dosh Crumbo, D 12 defer reverentially to a real word-hoarding boarder of so-posh SJ Clongwo.

So now: time to do a spot of deconstruction on the superior tosh which The Toole has opted to drool over in his own brand of borrowed striped-pyjamas prose, finding it kosher to do so. Employing borrowed s.pj.p. is a key element of this process: nothing better to wipe the floor with the flailing anti-semite Gaels. Issuing from the hoist, as it were. His geek-like critique freaks out gleefully at the Greek title. As a descendant of the O Tooles of Imaal/ I’m All: the Gaelic is Greek to him.

In the excruciatingly crucial scene which The Toole ran his rule over, there are three central characters : Leopold Bloom, The Citizen and not forgetting – where would the Linguistic Lapdog with a Laptop be without it ? – the Citizen’s dog, called Garryowen, a rabid, foaming, four-legged Fíor-mhadra Gaelach of the frothy kind we’re all since come to recognise and despise.

It is not exactly pocket billiard science to recognise why The Toole feels so impervious to criticism of his imperial assessement of a Day in the Unleavened Life of Leopold and Molly B:

-Hit me with the Mollocaust in my arms, would you?

Take two human fictional characters who had originated in Dublin in the previous generation: if say, the truthy Leopold Bloom had been a mere rude gentile from, say, Romania like the toothy Count Dracula, rather than a gentle Jew, would ‘Ulysses’ be the Jamboree in June we see today ? Or, more to the point, a Son of the Prophet, called, say, Abdul Abulbul Amir ? No, no profit in that.

Luckily both Abdul and Count Drac had both already been plaqued by French and Stoker Associates, so neither was an option: time then to shrewdly call forth Leo the First, and make room at last for Bloom in the spleen-filled capital of the Green : great hatred, little room, that sorta thingy. Over dueish, some might and do contend. An astute low-blow, forsooth: so it Clongowes. The writing was finally on the w. wall for the anti-semitic PSAMM and their Sam Maguire.

Ach, fan: focal bog sar a n-imeoidh tú: cé hé an Saoránah frith-dheas seo a thruailleodh an Saor-Stáitín ó Dheas dá mbronnfaí an deis air ? / Who on earth could this anti-semitic nationalist be ? He’s called The Citizen. Who he? Boy, bring one a clue ! From where the seagull was perched atop the Cusack Stand in Crow Park yesterdary 82,000 citizens were to be seen. Ah, so this is the Citizen called Michael Cusack, a cranky Bog Oak Monolithic type for whom a posher J.A. Joyce harboured a profound rancour?

So then, was the great originalist of the English-language novel original in his real life rancour? Well, sadly, no. It was all inherited from his pater, lock, stock and pork barrel. Nothing of this oath-dappled loathing found its way to dribble down the scribbler’s Daddy’s inside leg.

At the tender age of seven or so young Jimmy Joyce (who was born the same year as Seamus O Kelly, a superior weaver of words who was dispatched to an earlier grave by a pro-semitic mob) was ear-yanked out of O’Connell’s Christian Brother’s School to be deposited in the nearby knowledgeable Belvedere College of the Jesuits, with the following paternal, whorl-shaped snarl in his hearing hole:

– No son of mine will be contaminated by Paddy Stink and Mickey Muck !.

In Homer’s Odyssey, incidentally, when Ulysses blinds the Cyclops, the Cyclops asks him: “Who are you?”, to which Ulysses replies (in the Latin translation): Nemo. No-one. Nobody. Neamhdhuine.

TUILLEADH LE TEACHT : TO BE CONTINUED