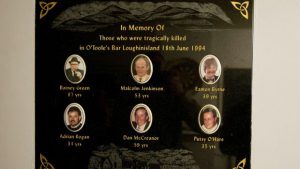 Some actions are so stupid, you wonder if the actors are making some sort of satirical, self-parodying statement. It’s like Gilbert and Sullivan’ s comic policemen, or the Keystone Cops, only with a nightmare background.

Yesterday one of those super-dumb events occurred. Barry McCaffrey and Trevor Birney, two highly-respected journalists , were arrested on the grounds that they had stolen documents from the Ombudsman’s office. The award-winning reporters had worked on the Loughinisland massacre, and in case you’ve been living in a hole in Outer Mongolia for the last thirty years, the Loughinisland massacre happened in 1994, when the UVF fired on people gathered in a bar in Loughinisland to watch the Republic of Ireland play Italy. Six people were killed. The documentary film No Stone Unturned was made, looking at claims of collusion, and people who were suspected were named. The two journalists were held for some hours, then released yesterday.

The law firm representing the Loughinisland families made a statement on the arrest and quoted Clare Rogan, a spokesperson for the families:

“Today’s arrests show the lengths of desperation that the British government and state forces are prepared to go to, in order to stifle the truth about what happened in Loughinisland”.

There are some events that seem so unlikely, the temptation is just to stand with your jaw sagging open and your eyes bulging. Like many other families, the Loughinisland families haven’t even had an inquest on the deaths of their loved ones. There is a general belief in most quarters that the state supported the UVF gunmen who killed the six people in Loughinisland. The Police Ombudsman’s report supported that interpretation of events. And then what happens? The police – our not-so-shiny, not-so-new police – arrest the journalists who have investigated these claims of collusion,  on the grounds, I gather, that the journalists must have ‘stolen’ documents from the Police Ombudsman’s office.

Here’s a prediction: if the two journalists are re-arrested and convicted,   the justice system here, not to mention the police service, will have succeeded in alienating everyone who believes that there are such things as truth and justice, and that those who seek them are deserving of applause, not arrest.