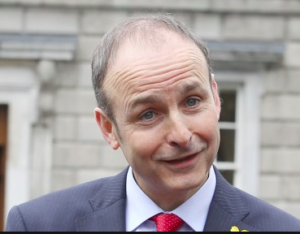 Micheál Martin is not the strong silent type. The pace of his delivery matches and surpasses that of Michelle O’Neill (although she has slowed considerably of late) and the first word that would leap to your brain on considering him is not “strong”. Not as smarmy as Leo but not strong either.

Micheál Martin is in a terrible fix. He is desperate to become Taoiseach, and he knows that the next election is his last shot at the big job. Likewise, he knows that he’s signed up with Leo Varadkar to keep the Fine Gael government in office… You say you thought that Fianna Fail and Fine Gael were the deadliest of enemies? Not at all, at all, at all. You couldn’t slip a stiffened sheet of toilet paper between the two. Almost a hundred years ago the two fell out and spent several months killing each other. No, not making each other laugh – literally killing each other. But that was a long time ago, and the killing was done by, how shall I phrase it, good and decent people. Unlike some.

No, Micheál’s main problem is how, without renouncing what he’s been up to since the last election in the south, to put green water between himself and Fine Gael. Otherwise people might say to themselves on election day: ”I can see no difference between these two parties. They have agreed on the big things – how else could Leo have stayed in power – and now Fianna Fail are telling us they have a different policy. Pshaw!”

It’s a terrible thing to see a man tie himself in knots trying to explain away the inexplicable, but that’s what Micheál Martin must do. He has to tell people that he’s proud of having supported Leo and stabilized things generally, while at the same time tell people that what Leo has done and is doing is nothing short of disastrous.

And guess what? Leo has given Micheál a leg-up. He’s asked Micheál to do another two-year pact with his party, bring stability to a state where thousands of children are homeless and the house market has been pumped up to the point where we’re headed for a farcical house market crash. (No, Virginia. The first time it’s a tragedy, the second time it’s a farce.). Micheál has said “Show me your budget first!” in a very firm, leaderly way, in the hope that the public will be impressed by how he’s refused to be taken as a sucker by Leo.

Micheál must make a dash for freedom, and quick. Because if an election is called before that,  he’s going to be exposed to very very cruel public laughter.

View all posts by Jude Collins →
The buffoon who would be Prime Minister by John Patton
GLITCHES, TYPOS, AND SENIOR MOMENTS.- APOLOGIES TO READERS by Donal Kennedy