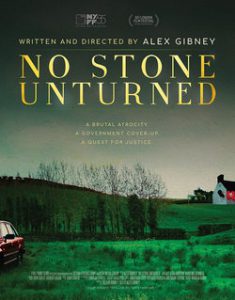 I finally got round to watching the film No Stone Unturned last night. The fact that it’s on Amazon Prime means it’s available to anyone anywhere. On the other hand, that it’s gone so quickly to Amazon Prime might suggest that not huge numbers of people are all that interested in Loughinisland and what happened there, or the subsequent police actions.  Which is understandable but a pity.

It’s understandable because much of the film has to do with official reports that have been written about the Loughinisland killings, when six innocent people watching the Ireland v Italy game in a small country pub were gunned down by two UVF paramilitaries. That happens at the beginning of the 1 hour 50 minute   documentary; the rest is talking to relatives and people connected to the case, and perusing documents where policemen are ‘Police officer A’ or ‘Police officer B’, and others involved similarly identified – or rather, not identified.

The programme makers boldly decided to pour this alphabet soup down the sink and identify the three men involved in the Loughinisland killins – the driver of the getaway car and the two gunmen. We’re told that the two journalists involved, Barry McCaffrey and Trevor Birney, were recently arrested on suspicion of having stolen documents from the Ombudsman’s office. I don’t know if that’s true or not. But I do know that the whole idea of the arrest was to put the fear of God – and/or the police – into those who made the film and exposed the absurdly incompetent/totally corrupt manner of the investigation. And, as  Voltaire said, “Pour encourager les autres” – to encourage others. A great man  for the irony, Voltaire.

As I watched, I found myself thinking of the BBC and the Catholic Church. In both institutions, cases of sexual abuse have occurred and those guilty rightly condemned. But knowing a little of both institutions, a thought nagged at my brain: who knew? I don’t mean those directly involved in the abuse, or even those who covered it up. I’m thinking of people in both organisations not directly involved. Wasn’t there a general awareness among the clergy – and even laity – that Father X was involved in some mucky activities? An acceptance among people working in the BBC that Star A really was a right degenerate and wasn’t it shocking? In short, in both institutions an awful lot of people beyond those involved with the specific case must have known what was going on – and said nothing.

Which brings me back to the police and Loughinisland. One of the relatives told the interviewer that the day after the killings, a neighbour had said to her “If you’re looking to know who’s responsible, you need look no further than there”, and he indicated with a nod of his head the police officers investigating the killing. The debate about collusion with the loyalist paramilitaries tends to be between those who’d argue that it was just the proverbial rotten apple or ten that was/were involved. The other interpretation suggests that corruption was endemic in the RUC. There is a third option: that while not all of the RUC were corrupt, there must have been a general awareness among its members that some lethal deception was occurring – and they looked the other way. And innocent people died. And their killers remained at large. And, in the case of Loughinisland, it would appear, still are at large.

GLITCHES, TYPOS, AND SENIOR MOMENTS.- APOLOGIES TO READERS by Donal Kennedy
Opinion polls and knowing when they lie