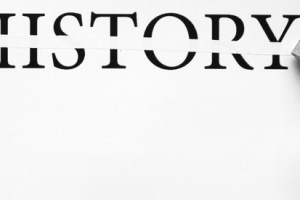 Re-writing history: it’s becoming an increasingly common charge. It’s usually made by a unionist politician or commentator, and it springs from a nervousness about what happened in the past.

For example, earlier this year the Pat Finucane Centre in Derry issued a report looking into the exodus of Protestants from the West bank of the Foyle to the East. They found that in addition to intimidation, many Protestants moved because of poor housing and lack of economic development. Gregory Campbell firmly disagreed: “Instead of attempting to rewrite history, we should ensure future generations do not forget the reality of what happened as it has been chronicled on film, in print and on stage.”

No attempt to dispute the evidence the Pat Finucane Centre produced: just a refusal to have the past version of events changed or added to in any way.

More recently, unionist commentator Alex Kane has taken up the term, speaking of “the rise of Sinn Fein (and the accompanying attempt to rewrite history)”.  Later in the same article, Alex declares “Sinn Fein is rewriting history and nailing down its own very specific, self-interested agenda. What else would you expect it to do?”

Charges of rewriting history imply that the existing version of history is the real and accurate one, and the re-writers are engaged in a manipulation of the past, bending it to suit their purposes. Or, put more bluntly, they are lying about the past.

Alas, the shoe appears to be on the other foot.

For example, we were told that the Birmingham Six were guilty of horrific bombing actions in England. Everyone believed this and they were sent to jail. Then it emerges that this version of what happened was a pack of lies, and the Birmingham Six were released. We were told the same about the Guilford Four, then years later they were released also. Earlier in the Troubles, hundreds of young and not-so-young men were imprisoned without any specific charge. It was called internment. It happened. And it happened overwhelmingly to Catholics/nationalists/republicans.

Then there was Bloody Sunday and, as seen on TV last night, the Ballymurphy Massacre. In both events, the Parachute Regiment’s Captain Mike Jackson (later to become General Sir Mike Jackson, head of the British army) told blatant lies about a firece gunbattle in Ballymurphy in 1971, between his men and a non-existent group of twenty heavily-armed terrorists. In the wake of Bloody Sunday the same Captain Jackson issued a statement insisting that all of those shot were carrying weapons of one kind or another. Decades later the truth, bruised and battered, was dragged out: those killed had no weapons but were innocent people gunned down by – yes, Virginia – the Parachute regiment.

“Re-writing the past”: translated, that means “Stop producing this uncomfortable and incriminating information. We prefer ‘The IRA were to blame for everything’ version.”

View all posts by Jude Collins →
Twitter storms and infiltrating schools
Who’s afraid of big bad Albion? The DUP is