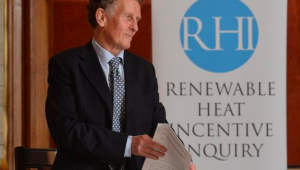 It’s like watching a cat getting sick in slow motion – not something you particularly enjoy acting as audience to, but difficult not to keep looking once it starts. I’m talking, as you’ve guessed, about the RHI inquiry. As-it-happens inquiries, where we get to see big shots squirming and stewing in their own juices, do get massive public attention. The Watergate inquiry was the big one, of course, back in the 1970s. But the RHI inquiry isn’t bad either. Or very bad, depending on how you look at it.

Here are six things that have snagged my attention so far.

The hearings have some way to go but already there is general agreement among politicians and pundits that the DUP has been exposed as a party where brotherly love was bound, gagged and thrown down a well. There are cliques and factions in all parties, but the DUP seem to have infused theirs with an injection of very dark spleen.

Are the SPADs worse than the politicians they serve? No, probably about the same level. Normally the SPAD in question is chosen by the Minister him or herself (with the obvious exception of Jonathan Bell). So it’s unlikely that a SPAD would have a different outlook on life. Yet we’re hearing that SPADs were up to all sorts of dubious practices.

One example. Dr Andrew Crawford (long-time adviser to Arlene Foster) tried desperately to divert attention away from the fact that his cousin Richard had six RHI boilers, or that another relative, John Crawford, had three RHI boilers. And of course their decisions had nothing to do with communication between Crawford and cousins on the RHI subject.

Will these revelations damage the DUP in the next election? Well, Ian Paisley Jr’s luxury hols and petitions to the PM don’t appear to have fazed them. Whether the RHI cat throwing up on the DUP carpet will make them feel differently is a matter of conjecture.