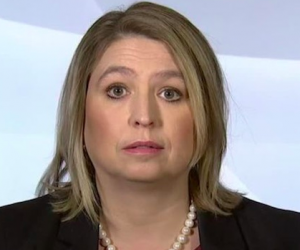 I never thought I’d type these words, or if by some awful mistake I did, I’d immediately chop off the fingers of my left hand and get a friend to chop off those on my right. What words? These: The British Secretary of State is being given an unnecessarily hard time.

Oh-ho. The critics went after her.

Jenny Chapman, shadow Brexit minister: ““Given this worrying lack of basic knowledge about Northern Ireland, it’s no wonder the Tories don’t seem to understand the vital importance of preventing a return of a hard border there [ in NI].”

Oh-ho. Marina Hynde in The Guardian: “Karen’s answer is the type of WTF-ery that allows even Vernon Kay (VERNON KAY) to mug to camera with the practised eyebrow-raise that says: where do they find these quarterwits? It was previously thought that any challenge to Andrea Leadsom’s position as stupidest cabinet minister would have to hail from the mineral or at least vegetable kingdoms. Or be Chris Grayling. But this is quite sensational from Karen, who places herself in the IDS class at a stroke.”

Savage and witty words. But is Karen really that bad –I mean outstandingly bad? From Reggie Maudling’s famous “For God’s sake bring me a large Scotch. What a bloody awful country!’ to the ineffable Roy Mason promising to “squeeze the IRA like a tube of toothpaste”, one after another, British Secretaries of State have been smarmy, vindictive, clueless and/or plain stupid. Why single poor Karen out?

Besides, she did say after her dumb bit about unionists not voting for nationalists, etc – she did say “Actually, the unionist parties fight the elections against each other in unionist communities and nationalists in nationalist communities.” Completely true, Karen. I mean, do you know many people who were republican and who now vote unionist? Or vice versa? In Britain, in contrast, there are people who sway from Labour to Tory and back again. Here in our deep-green, deeply depressing corner of Ireland, there are very view who move from one camp to the other. So naturally Karen was a bit taken aback at the not-an-inchery of it all.

Please don’t think I’m saying Bradley is the answer to Ireland’s prayers. No no no no no, and No. She’s just displayed her uselessness by putting in place a pay cut that is so timid, even the MLAs she’s going to take the money from must be laughing. And she has done nothing to bring the parties together. Or to see to it that things the British government signed up to– like an Irish Language Act or a Bill of Rights – are actually implemented. You lose a bit of your moral authority (if you have any), not to say street-cred (if you have any),if you keep failing to match promises with delivery.  Holding a garden party for 1500 guests is grand, but it’s not quite the same as getting your coat off and working with the south’s government to implement all aspects of the Good Friday Agreement.

But I repeat: don’t be too hard on poor Karen, for saying in a clumsy way that there’s not much cross-over from unionist to nationalist and vice versa here. Instead, fault her for publicly deploring the failure of both main parties, when in fact her prime minister continues to be prime minister courtesy of one of the parties. Fault her for not looking at the impasse and tracing it back to its source: DUP arrogance and duplicity. Haven’t you been watching the RHI inquiry at work, Karen? All those people that are blaming each other: they’re unionists. Which makes your calls for both parties to behave quite pointless, since both parties didn’t create this gigantic cock-up, just one did.   But I’ll give you your due, Karen: you know the need to deliver bland generalisation and above all not annoy the DUP. Hell will reverse global warming before you’ll dare to call a DUP spade a teaspoon, let along a bloody shovel.

So it’s not just my gentlemanly nature that makes me ask people to stop mocking this woman. If you were in her shoes, and you knew that your party could be dumped out of government if you were to say something that’d upset the DUP, mightn’t you give a clumsy answer that would be seized on and ridiculed?