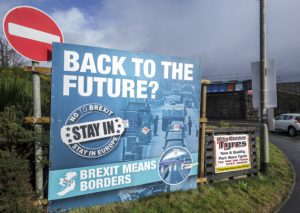 Do you suffer from insomnia over Brexit? A week or so back, I was talking to two people who may not stay awake at night but but who certainly fret over it quite a lot. They’re members of Border Communities Against Brexit, and both live in the north close to the border. We talked for an hour and it was an education.

They described the economic impact Brexit would have on their lives. They noted, for example, that the south’s infrastructure had improved immensely, because EU funding was matched by the state’s, unlike in the north. When and if Brexit comes, the gap in infrastructure quality is going to increase alarmingly.

One of the two people is a beef farmer. Alongside a massive cut in subsidies, farmers in the north will suffer because Britain, post-Brexit, will go looking for cheap food agreements internationally, and that will mean farmers here will have to accept reduced prices for their animals.

As for the agrifood industry, Ireland produces 15% of the world’s baby formula. China is an important market and is very fussy about quality. Once the north is removed from the EU, the Chinese will feel the guarantee of EU quality is gone and trade will drop off. There are 100,000 people in the north employed in agriculture or the agri-food business. With Brexit, job losses could reach as high as 25%.

Then there’s the pharmaceutical industry. At present all drugs are made to an EU regulation. With Brexit, that guarantee of standards would have to be replaced, which would take time as well as effort. While that was being done, tens of thousands of jobs in the north may well be lost as factories move south or close.

Or take Bailey’s Cream. Milk for it goes cross-border to be processed. Then it’s transported in tankers to East Belfast, where it’s bottled. From there it goes to Dublin, to be shipped to the world. With Brexit, there’ll be a World Trade tariff every time it crosses the border.

And there were more – many more – instances like that. At the end, I asked them what aspect of Brexit was of greatest concern to them. They both agreed immediately: the re-installation of a hard border.

Some people forget that the EU had its roots in post- WW2 Europe, which had endured massive carnage for the second time in the twentieth century. Never again, the governments of Europe vowed, and the EEC, later the EU, came into being, Likewise with the hard border and the bloodshed of the Troubles. Never again, the combatants decided, and the Good Friday Agreement was born. For people under thirty, the idea of a border will seem totally alien. And unwelcome.

There are people, notably the DUP, who pooh-pooh such fears. Let’s hope they’re right. But if a hard border is put in place, it’ll be like partition all over again. Just when we were getting used to the pleasures and comfort of driving throughout our country, the old division, hard and awkward, will re-appear. There will be serious resentment among nationalists, and, I’d suggest, considerable sympathy for those who are determined, by any means, to resist it.

But whatever the threat to peace – the threat to jobs and livelihood will lay waste to the economy. And when people feel that this wasn’t what they voted for, their anger will be deep.

That Brexit train is sounding shriller and more frightening with the passage of every week.