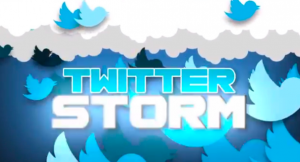 I have been the target of two twitter-storms in my life. The more recent to produce froth-flecked mouths was when I tried to explain the meaning of the word ‘murder,’ and how in my view it was a misnomer when talking about the casualties of the Omagh bomb. Well! That I should dare to even think that the bomb wasn’t premeditated murder – get this disgusting geriatric off the BBC and all other media platforms! A petition to ban me from the airwaves was mounted and so far it’s been spectacularly successful: I haven’t received a BBC invitation since. It’s called free speech.

The other twitter-storm was generated by a tweeted photo of some paramilitaries parading in Lurgan, with a couple of youngsters in paramilitary garb standing behind them. This of course caused – you’re ahead of me, Virginia – outrage. Wasn’t this a form of child abuse, having children in paramilitary uniform? I tweeted a photograph of a group of youngsters in Boys’ Brigade uniform with the comment “A bit like this, then?” ‘Strewth. You could have had a bubble-bath in the amount of lip-froth that followed. How dare I compare the Boys’ Brigade with children dressed in republican paramilitary gear! The fact that the Boys’ Brigade was a brigade, that it had captains and various other ranks, that it wore brigade uniform, that it trooped the colour, that ‘paramilitary’ means having the trappings of the military – none of this mattered. A wave of white-hot fury swept through the usual suspects.

Which at the time I thought was weird, and further research shows to be even weirder. According to last Sunday’s London Observer newspaper, arms manufacturers are spending millions of pounds in promoting their hardware in British schools. They sponsor school events which display their brand, they put together teaching material to be used in classrooms that promote ‘the defence sector’, they sponsor competitions and award prizes.

One company hired a top children’s TV presenter to promote its activities in a school, while another (can you believe this?) developed a missile simulator which they said the pupils “could play with”. The Campaign against Arms Trade said “Schools are vital to our society and should never be used as commercial vehicles for arms companies. It is time for arms companies to be kicked out of the classroom.”

In the meantime BAE systems, which is the largest arms company in Europe, last year visited 430 schools in the UK and prepared lesson plans for seven-year-olds and up. Online, BAE boasts that it spends tens of millions of pounds every year reaching children as young as four. They pass out worksheets to the kids, encouraging them to think about how BAE’s camouflage system “could have significant advantage on the battle field”. Since 2005, the company boasts, well over 200,000 youngsters have seen a BAE roadshow.. And it has almost 850 “ambassadors” – usually school governors – in schools throughout Britain.

Raytheon, which is the fourth-largest arms company in the world, runs a competition across the UK where pupils build model drones. Another arms company, Thales, produces teaching resources and lesson plans for teachers, and it’s come up with a missile simulator as a new activity “for children to play with”. It sponsors something called the Big Bang Fair.

In other words, while I’m put in the public stocks and abuse is hurled at me for expressing my opinion, arms manufacturers are writing lesson plans for teachers and teaching children that missiles are really toys. Have you heard a peep of protest from anyone here? Right – me neither.

Given the silence on this military infiltration of schools and its contrast with the scream of protest that I should talk about what constituted murder during our Troubles, I sometimes wonder if my words aren’t meeting some deep and dark Freudian need for those who react to them with such throbbing passion.

Why are unionists starting to favour a border poll?
Rewriting history? Somebody’s got to do it.