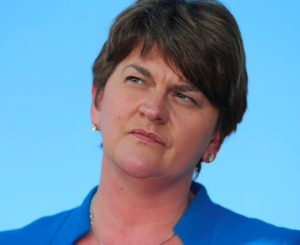 Do you remember when the polite Dublin 4ers and the scornful northern unionists used to roll their eyes in disgust at Patrick Pearse’s speeches and their references to a blood sacrifice? Loony dreamer of blood-drenched dreams, a half-crazy who called others to accompany him in a doomed rebellion.

And do you remember how much we heard in 2012 and after about how some of the men signing the Ulster Covenant, vowing to use whatever it took to keep Ireland in the union with Britain, used their own blood to add their signature?

It looks like it’s deja vu  here we go again. The pride of Fermanagh is reported in The Irish Times under the heading “DUP leader Arlene Foster: ‘Our red line is blood red’.”

Not content with dragging the rest of us in this tormented green corner (TGC) out of the EU – even though a clear majority voted to stay – Arlene is now saying that there cannot be a border in the Irish Sea. Which is another way of saying that there’ll be a hard border in Ireland.

Sweet St George and St Patrick. Where do you start with this devious thrashing around that the DUP and the Tories are up to? Some reminders, guys.

Bright light in the pervading gloom: this time, unionism won’t simply be confronted by the opposition of the entire Irish people. It’ll be faced by the united strength of twenty-six other EU countries.

Arlene, you once urged those calling for a border poll to be “careful what you wish for”. Right back at you.