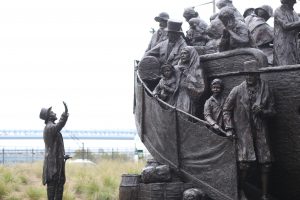 Memorial to Irish survivors of An Gorta Mor arriving in Phildelphia

One of the great myths about Irish-Americans is that they are clueless about modern Ireland: their eyes are misty and filled with images of  comely maidens dancing reels and Mother Ireland groaning under the yoke of England. There are probably Irish-Americans who live in such a make-believe world, but having talked to them over the past week in New York, Washington  and Philadelphia, I found no trace of such dreamers

Irish-Americans look back, certainly: they commemorate the hunger-strikers, they speak with affection of Martin McGuinness and their memories of him.. But they were insistent at every venue that I leave time in my talk to comment on current matters, especially Brexit. These were people from all walks of life: cops and former cops; lawyers; accountants; physicians, business people, people in construction. Some had come over to the US in 1970s and 1980s, some even earlier, more recently. Some were the descendants of people who arrived on  coffin ships in the mid-1800s. Two things in particular struck me about virtually them all: they were happy to live in the US as participating citizens, and they were informed.

The happy bit contrasted with my own time spent living in Canada during the 1970s. Then, among many of the Irish, there was a tug towards home, a longing for the way things were, a sense that this was just for a few years. Here, the Irish-Americans that I spoke to seem completely at ease with their lives in the US. They follow Gaelic football and hurling, they’ll explain what app you need if you want to get the big GAA games, and they think nothing of flying back to Ireland for the weekend to attend an All-Ireland final. Their children have learnt Irish dancing, they play Gaelic games, they play Irish music. At one down-town Irish pub where an Irish-American arts group meet several times each month, I listened as a young woman sang, unaccompanied, a haunting sean-nos  song.

Not all Irish immigrants immerse themselves in things Irish, of course. Younger immigrants, highly educated, are more likely to dive completely into American society, to have less interest in maintaining Irish cultural ties. But there are plenty who do value things Irish. They are completely in touch with what is happening ‘at home’ and keen to hear more. And they don’t hold all their events in Irish pubs: in Washington DC they booked a room for my talk at the  prestigious National Press Club, in New York they used the beautiful building of the American Irish Historical Society on Fifth Avenue.

Irish-Americans are not as cohesive and powerful a force as they were during those years when they were persuading President Clinton to involve himself in the peace talks that culminated in the Good Friday Agreement. But they still form Irish communities that are alive and vibrant, proud of their Irish heritage and keen to maintain it.  Those who like to dismiss all Irish-Americans as plastic paddies only reveal their ignorance of the people they insult.

View all posts by Jude Collins →
Danger: disaster ahead
Was the British government the main protagonist in the Troubles?