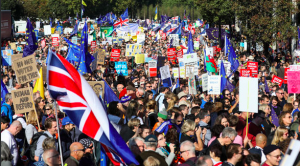 OK – so now we’re back in December of last year. Or Theresa May appears to be, finally. You’ll remember that in December 2017, she committed to the backstop for Ireland, and again in March 2018, but since then she has been hopping like a hen on a hot stove to somehow get out of her commitment. So I suppose we should be grateful that she’s stopped hopping and concedes the need for a backstop.

How are things going to pan out over the next year or so? Impossible to say. But we can conjecture. Here are five possibilities.

Will any of this happen? There’s a good chance one of the five will become reality. But two things are certain: (i) Brexit if it comes will bring economic chaos; and (ii) As English nationalism grows, the UK is going to creak and groan as the forces of disintegration bear down ever more insistently.

My considered political advice? Start praying. Nothing short of a heavenly thunderbolt will stop the likes of Rees-Mogg and Johnson.

View all posts by Jude Collins →
BREXIT:  PARTING IS SUCH SWEET SORROW by Michael J Cummings
OLD ROPE PART 3. THE HUMOURS OF THE (LONDON) TIMES  by Donal Kennedy