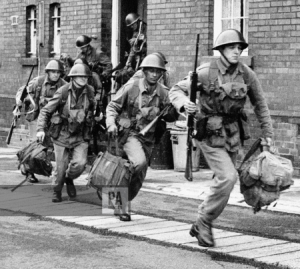 Where do people get their ideas on contemporary matters? From their own experience, from friends and from the media. The first two have clear limitations. Space and time restrict the number of personal experiences you can have, and how much you can learn from them. Likewise, you may be popular but you can have only a limited number of friends from whom you’ll pick up ideas or opinions.

Which leaves the media. There’s a change occurring, with newspapers, radio and TV on the wane and social media on the rise, but it’s not there yet. An op-ed in a major newspaper carries a lot more muscle than the vast majority of bloggers or tweeters.

And that’s why I feel irritated by the Irish Times. A day or two ago they had an editorial highlighting “Sinn Féin’s evasions”. The Shinners, it seems, have had the gall to describe the British government as the main protagonist in the years of conflict. The IT lambasts them for this, quoting the casualty figures over the years: “ The IRA killed 1,696 people, the British army 299 and the RUC 56.”

Likewise the British government. They bore ultimate responsibility for letting the Stormont government gerrymander and discriminate at will for fifty years. Bernadette Devlin’s maiden speech in the House of Commons touched on this, reminding MPs that the state of the north was “Britain’s shame”.

So in its inaction before the armed conflict, allowing an Orange state to act as it pleased for decades, and its sanction of repressive and frequently lethal actions, the British government used the British army to do what it could to cow the natives. When all disputes and diversions have been explored, we come back to one core awkward fact: the British government has, for the past hundred years, claimed jurisdiction over a part of Ireland, and has used armed men to maintain that jurisdiction.

Call me an optimist, but I still think the Irish people should be allowed to exercise control of their own country, not the next-door neighbour. It’s because successive British governments have failed to observe this basic democratic aspiration that our Troubles have been so bloody. And to rub vinegar into the wound, we were forced to pay the armed forces who travelled to Ireland and killed members of our community, sometimes in broad daylight.