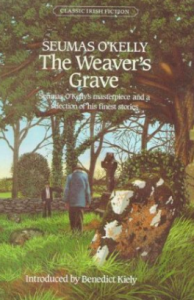 At the eleventh hour on the Eleventh day of the eleventh month of  the year of our Divine Lord 1918  the guns fell silent in Western Europe.Most Europeans, including the Irish,, at the time acknowledged Jesus Christ as their Lord, and   their calendar was dated from His birth -Anno Domini, shortened to AD.

That fact should not be forgotten in our new-fangled   Leocratic Republic with its Leo-mangled Constitution.

England’s War was not Ireland’s and the Irish people, and indeed, England’s people, were never consulted about it.

But some inhabitants of Dublin considered the war THEIR war and they celebrated the silence of the guns riotously. They attacked Sinn Fein’s Dublin headquarters, which was undefended, and beat-up Seamus O’Kelly, who died from his injuries a few days later.

O’Kelly was a playwright ,poet, novelist and short-story  writer .His novella, “The Weaver’s Grave” is considered a masterpiece. Many years after his death the novella was adapted for the stage by Micheal O hAodha, and the play won the Prix d’Italia.

He was editing Sinn Fein’s Journal “Nationality”  while its regular editor, Arthur Griifith, was in a  British Gaol  for spurious reasons.

The next month Sinn Fein won 73 of Ireland’s 105 Parliamentary seats on a Republican manifesto. The London Times declared that the election was regarded on all sides as a plebiscite (or referendum.)

The inviolability of elections and referenda was a concept unrecognised in London.

View all posts by Jude Collins →
Is the DUP on the wrong horse?
Coveney cuts the mustard on ‘Today’