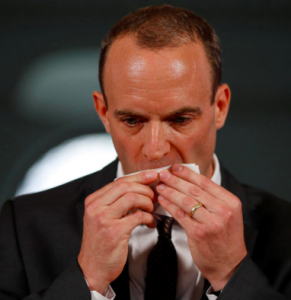 “Hooray for the fudge!” That’s what Dominic Raab, Britain’s chief Brexit negotiator, was saying as he pulled on his trousers and headed hot-foot to Brussels yesterday. After so may weeks and months (and years) of those Johnny Foreigners  acting high-and-mighty about the bloody Irish back-stop, they were now seeing sense and accepting – as Britain had always accepted – that you can’t tie a country down to act in a certain way without some time-limit on that action.

When he arrived at Brussels, Dominic looked around the faces and drew a sharp breath. Why weren’t they looking happy? Had they no homes to go to? The word he’d got was that they wanted to talk turkey, which was good, and that this damned Brexit thing –  this twice-damned back-stop thing – could be sorted in short order.

Dominic cleared his throat. “ Thanks for organizing this meeting, gentlemen, and I know I like you want to keep it brief, because like yourselves I have a wife and two children waiting for me at home.” He smiled and glanced round the faces. No response. Didn’t the bloody cheese-eaters have any wives? Families?  Or were they as sterile in producing children as they were in producing new negotiating ideas? He swallowed hard, took a deep breath. This was it.

“Gentlemen, I come with good news. The United Kingdom is willing to agree to your back-stop idea.”

“The back-stop, as you know, guarantees no change in border arrangements on the island of Ireland. We’re willing to go with that. Whatever else happens, the Irish border –“

“The British border in Ireland” a voice said. Dominic, his mouth going dry, didn’t even try to identify the bastard. Don’t get side-tracked.

“The border in Ireland” he continued, “will remain unchanged from now. This of course will be a temporary arrangement.”

There was what sounded like a growl from around the table. The kind of growl a pit-bull might make before sinking its teeth in your leg clean through to the bone.

“Mr Raab”. It was that ponce Barnier speaking. “You are perhaps misinformed. I have in my hand here” – he waved a sheet of paper – “the letter which your prime minister agreed to in December last, when she signed up to a back-stop arrangement of no change in Ireland, whatever else”. He tapped the paper. “There is no mention of temporary. None whatsoever”.

After that things were a bit of a blur for Dominic. A babble of voices talking in foreign tongues, his coat being handed to him, faint cries of “Merde!” and “Enfoiré!” as his car pulled away and headed to the airport. His felt his shirt drenched in sweat, tears starting in his eyes.

They hadn’t bought it. The damned froggy bunch of non-English  dirt-bags hadn’t bought his fudge. He leaned back in his seat as the plane took off, closed his eyes. Theresa’s face appeared, dead eyes staring into his wet-with-tears eyes.

“You pathetic excuse for a man!” she was saying, grinding her teeth between syllables. “You ballsed that one up big-time, Raab, didn’t you? Don’t know why I appointed you. Compared to you, Davis was a Bismarck!”

Behind his eyes, Dominic felt a thudding migraine start. “What a bloody awful continent!” he murmured, signaling to one of the cabin crew. “For God’s sake bring me a tall brown one and make it quick.”